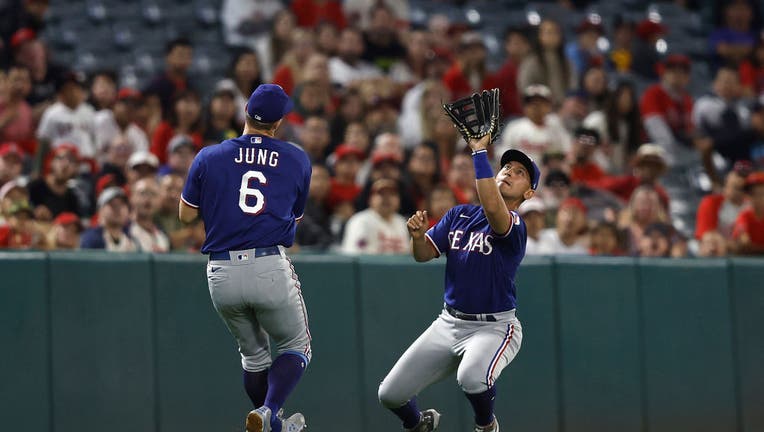 ANAHEIM, CALIFORNIA - SEPTEMBER 30: Mark Mathias #9 of the Texas Rangers makes a catch for an out against the Los Angeles Angels during the third inning at Angel Stadium of Anaheim on September 30, 2022 in Anaheim, California. (Photo by Michael Owens

Shohei Ohtani extended his hitting streak to 15 games a day after the 2021 AL MVP nearly pitched a no-hitter for the Angels, who improved to 4-0 on the final homestand of their seventh consecutive losing season. Los Angeles is on its longest winning streak since April.

Adolis Garcia had an RBI double for the Rangers. They have lost three straight and six of seven.

Detmers (7-6) struck out nine and allowed one run while earning one last win in an up-and-down debut season. The left-hander threw a no-hitter in May, but was subsequently demoted for a brief stint at Triple-A before returning for a decent finish to the season that included an immaculate inning against Texas on July 31.

"You always want to finish on a strong note," said Detmers, who finished the year with a 3.77 ERA. "The last couple of weeks have been a little bit of a struggle. I would have liked to start out (the season) a little better, but going down, figuring out some stuff and coming back, I learned a lot."

Detmers wanted to pitch longer in his season finale, but Angels interim manager Phil Nevin wanted the youngster "to end on a high note."

"It was a tremendous year for a guy two years out of college," Nevin said. "You can see there's a really high ceiling there. ... There's leadership. You can see him being a big anchor of a rotation, and leading guys and making them better. It's hard to say that about somebody that's 23 years old, but those are the type of guys you win with."

Jimmy Herget pitched the ninth for his ninth save, including three in the last four days.

Glenn Otto (6-10) yielded eight hits and three runs while striking out seven over six innings for Texas. He went winless in six starts in September despite allowing more than three runs only once.

"I thought Otto did a nice job for us," Rangers interim manager Tony Beasley said. "He kept us in the ballgame. He gave us six solid innings of work and gave us a chance. We just couldn’t muster up any offense."

Ohtani had two singles one day after getting within four outs of a no-hitter against Oakland. Ohtani has multiple hits in four of his last five games, and he has done it in 11 games since Aug. 28.

Ohtani singled in the first to extend his longest hitting streak since a 17-game streak with the Nippon-Ham Fighters in 2016. Adell then hit his first homer since Sept. 6 in the second, and Rengifo followed with his second homer in two days in the third.

Corey Seager, who is on a team that will miss the playoffs for the first time in his eight-year big league career, walked and scored on Garcia's double in the fourth.

"Detmers did a nice job for them," Beasley said. "You tip your hat. He threw the ball well, executed his pitches and kept us off balance."

Mike Trout then doubled in the fifth and scored on Taylor Ward's long double to the gap.

Matt Duffy doubled and scored on an error by reliever Taylor Hearn in the eighth.

Kurt Suzuki announced his intention last week to retire after 16 big league seasons, and the Angels surprised the catcher with a pregame tribute that included video messages for many of his former teammates and coaches, including several members of his Washington Nationals championship team. Suzuki then got a standing ovation from the crowd and caught a first pitch from each of his three children: 11-year-old Malia, 8-year-old Kai and 6-year-old Elijah.

Rangers: Seager returned from a two-game absence with a bruised left forearm.

Angels: SS Andrew Velazquez is recovering well from right knee surgery and is expected to have a normal offseason, athletic trainer Mike Frostad said. The 27-year-old defensive specialist is under team control next season. ... The team is still hopeful RHP Griffin Canning can avoid back surgery after missing all of the 2022 season. The 2020 Gold Glove winner hasn't pitched in the majors since July 2, 2021.

José Suarez (7-8, 4.06 ERA) makes his final start of an up-and-down season for the Angels against rookie Cole Ragans (0-3, 5.40), who will take one more shot at his first career victory in his ninth start.