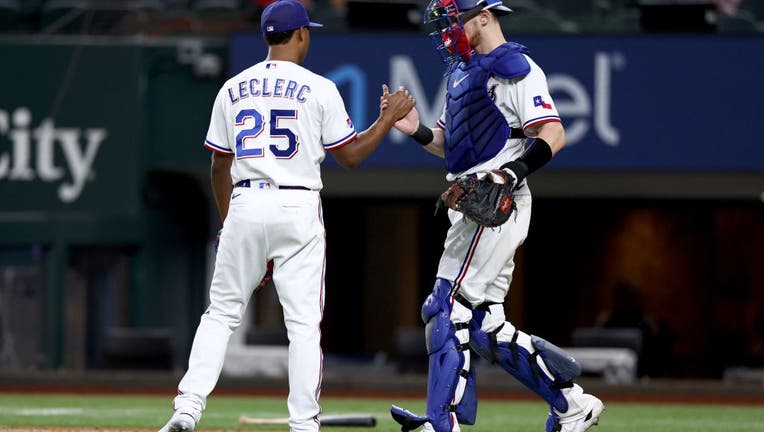 ARLINGTON, Texas (AP) - Rookie Josh Smith homered over the fence for the first time, and the Texas Rangers beat the Los Angeles Angels 7-2 on Wednesday night.

Smith's only other round-tripper was inside the park at Globe Life Field against Oakland in July when his liner skipped past the center fielder to the warning track. This 386-foot solo drive in the seventh inning tucked inside the foul pole in right.

"That one kinda feels like the first real one," Smith said. "It’s been too long, but you don’t know how many you’re going to get so I’ll take it."

Shohei Ohtani and Taylor Ward extended their hitting streaks to seven games in the first when Ohtani singled and Ward followed with his 19th home run for a 2-0 Angels lead.

Ohtani and Ward were working on another rally to start the seventh when the two-way Japanese star reached on a routine grounder because reliever Brock Burke didn't cover the bag. But Burke snagged Ward’s liner and doubled Ohtani off first.

Dane Dunning (4-8) struck out eight in five innings, allowing three hits and two runs. The right-hander stopped a five-outing winless streak as the pair of AL West also-rans have split the first two in a three-game series.

Smith had another RBI on a fielder’s choice that scored the speedy Leody Taveras with the tying run in the second inning. Smith took second when shortstop Livan Soto's throw home went to the backstop.

The 25-year-old Smith tied a franchise by reaching base in his first 11 games when he was called up in June. He went back to the minors last month before getting recalled. He stopped an 0-for-17 skid with a single in the ninth inning of the series opener.

"It's been a weird year for me," said Smith, who is hitting .205. "I haven't really hit the way I've wanted to. I know I have it in there somewhere. Just trying to find the consistency of it."

Adolis García had a sacrifice fly in the first and tiebreaking RBI double in the third off Angels starter Tucker Davidson (2-7). Taveras added a two-run single in the eighth.

"I saw good things," Angels interim manager Phil Nevin said of Davidson, who allowed three runs in five innings and dropped to 1-5 since being acquired from Atlanta in a trade. "I thought he threw the well and really the last two innings, coming out of those clean. Wanted to end him in a good note."

Nevin said Ohtani wouldn't be in the lineup Thursday before his scheduled return to the mound Friday night in Minnesota. Nevin said Mike Trout would get a break from center field as the designated hitter in the series finale against the Rangers, with Ohtani available off the bench.

Top Texas prospect Josh Jung had his second four-strikeout game, including with the bases loaded and no outs before Taveras' single in the eighth. The 24-year-old rookie has struck out seven times in eight at-bats in the series. The other was a game-ending double play in a 5-2 loss in the opener.

Veteran catcher Kurt Suzuki of the Angels said winning the World Series with Washington in 2019 was a big factor in the 38-year-old's decision to retire after the season. The 2014 All-Star said spending more time with his children was equally important.

Suzuki has played with five teams over 16 seasons. The Angels finish the season at Oakland, where he had his longest stint at seven years.

Rangers: INF/OF Nick Solak (right foot fracture) was placed on the 60-day injured list to make room for the free-agent signing of C Kevin Plawecki. The 31-year-old Plawecki hit .217 in 60 games for Boston before being designated for assignment and subsequently released.

Rangers LHP Martín Pérez (12-6, 2.84 ERA) can match his career high for victories Thursday. The 31-year-old in his second stint with Texas has a shot at the lowest qualifying ERA for the Rangers since Yu Darvish's 2.83 in 2013. Angels RHP Michael Lorenzen (7-6, 4.74) is scheduled for his third start since missing two months with a right shoulder strain.