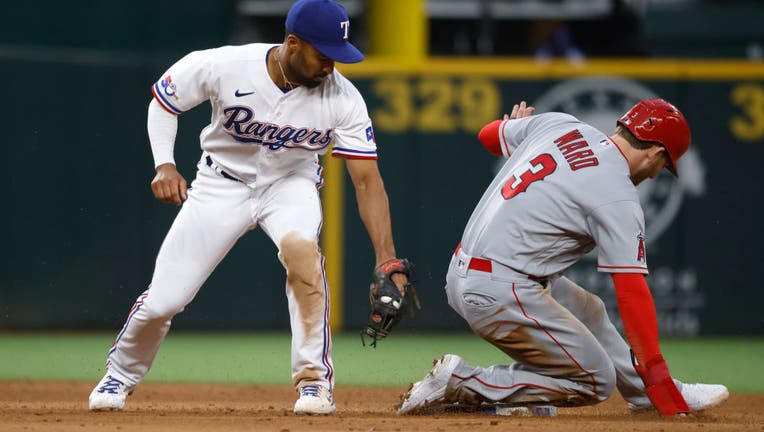 ARLINGTON, TX - APRIL 16: Taylor Ward #3 of the Los Angeles Angels is safe at second base as Marcus Semien #2 of the Texas Rangers is late with the tag during the fifth inning at Globe Life Field on April 16, 2022 in Arlington, Texas. (Photo by Ron J

The game featured two starters from opposite sides of the Dallas-Fort Worth Metroplex in Syndergaard and Rangers lefty Taylor Hearn. It also became the latest showcase for Ohtani, the two-way superstar who won the AL MVP award last year.

Both threw 82 pitches, but Syndergaard was more economical. He needed just five pitches to get through the first inning and did not walk anybody. The right-hander retired his last 10 batters after giving up two runs in the third.

"I loved the efficiency," Angels manager Joe Maddon said. "With all of his pitches, he was getting ahead of hitters. He could have gone seven innings for sure."

"I still felt pretty strong. My body feels real good, but I'm two years off from surgery," he said. "(Catcher Max) Stassi and I had a real good vibe going on."

Ohtani finished 2 for 5 with a two-run homer into the Rangers' bullpen in right-center. He scored three runs and drove in three more.

"I wasn’t sure if it was going to clear the wall but I am glad it did," Ohtani told members of the Japanese media.

The eighth-inning homer increased Los Angeles' lead from 4-2 to 6-2.

"His home run was a big at-bat at the time, getting the extra runs," Maddon said.

The Angels peppered Hearn (0-1) in the third inning. Four batters singled and sent teammates to third base, beginning with Tyler Wade's infield hit and a throwing error by second baseman Marcus Semien that sent Andrew Velazquez to third.

Stassi's single scored Mike Trout and sent Taylor Ward to third. Ohtani and Anthony Rendon each had an RBI in the inning.

Ward, coming off the injured list for his first game this season, went 2 for 3 with a solo home run in the ninth. He also walked twice and stole a base.

"I struggled in the third," Syndergaard said, "but I was able to get out without more damage."

He pitched just two innings over the past two seasons following Tommy John surgery in March 2020.

"I don't have triple-digit stuff yet," Syndergaard said. "It's my first year back. I want to focus on pitching and not so much on throwing hard. I do want to get that hundo (100 mph) going again."

The Rangers' beleaguered bullpen gave up four runs in the last three innings.

Syndergaard said of Hearn: "I know he's local. We have the same agency. I know he's got way more riding on a horse."

He was referring to Hearn's family background in rodeo.

"I've only been on a horse three or four times, which is bad considering that my dad's a horse trainer," Syndergaard said.

Rangers: RHP Josh Sborz (right elbow soreness) went on the 10-day IL, a day after allowing a two-run homer to Jared Walsh. Taking Sborz's place on the roster was LHP Matt Moore, who last pitched for Texas in 2018. Moore pitched two innings Saturday and gave up one run.

WORDS FROM THE BOSS

Research by members of the Society for American Baseball Research found just seven occurrences of bases-loaded intentional walks going back to Adner Dalrymple of the Chicago White Stockings in 1881.

Minasian was asked whether he had had discussions with Ohtani’s representatives on a contract extension. The GM smiled and said, "That’s an everyday question. Catch me on the right day."

NOT GONE WITH THE WIND

For the second night in a row, the Globe Life Field roof was open. In contrast to Friday, when the Angels hit five home runs with a breeze from the south, on Saturday there were just two homers with a chill northerly wind blowing across home plate at 14 mph.

On April 16, 1972, manager Ted Williams’ first-year Texas Rangers won for the first time in their second game since moving from Washington. Pete Broberg was the winning pitcher, and Lenny Randle and Frank Howard each had two hits and an RBI.

Angels: LHP Jose Suarez (0-1, 4.15 ERA) is scheduled to pitch Sunday in the finale of the four-game series.