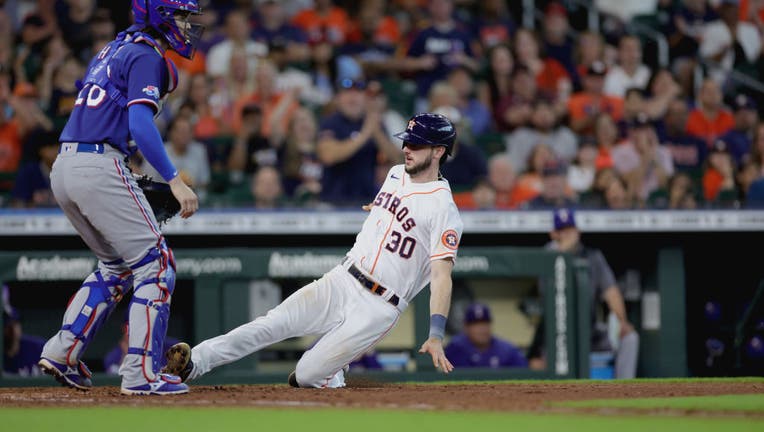 The Astros (72-41) moved one-half game ahead of the slumping New York Yankees for the AL's best record in manager Dusty Baker's return after he missed five games with COVID-19.

Valdez (11-4) allowed four singles and struck out eight to get his third straight win.

Jeremy Pena and Jake Meyers hit consecutive singles with one out in the second inning before Maldonado's soaring shot made it 3-0.

Yuli Gurriel singled to start Houston's fifth, and Bregman's one-out home run clanged off the wall in left field, extending the lead to 5-0 and chasing the 24-year-old Ragans, who made his second major league start.

Ezequiel Duran singled with no outs in the third before Valdez hit Bubba Thompson with a pitch. A single by Adolis Garcia with two outs loaded the bases, but Valdez retired Jonah Heim to escape the jam.

Heim was the first of 11 straight batters Valdez sat down before Leody Taveras singled with one out in the seventh. Charlie Culberson sent Taveras to third with a single, but Valdez struck out Duran and Thompson to end the inning and his day.

Bregman helped the Astros pad the lead with an RBI single in the seventh inning and Aledmys Diaz extended it to 7-0 when he drove in a run on a sacrifice fly.

Gurriel, who entered the game in an 0-for-12 slump, matched a season high with three hits.

Nathaniel Lowe and Taveras both hit RBI singles in the eighth inning to cut the lead to 7-2. Marcus Semien homered with two outs in the ninth.

Rangers: Texas has yet to name its starter for Friday night's opener of a three-game series against visiting Seattle.