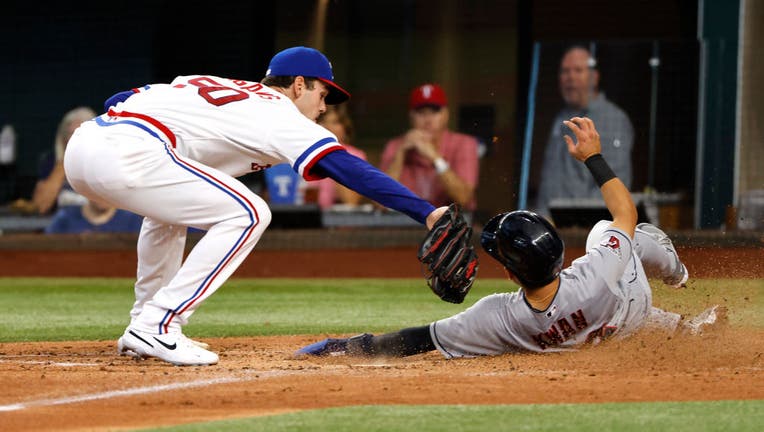 ARLINGTON, TX - SEPTEMBER 25: Steven Kwan #38 of the Cleveland Guardians beats the tag by Cole Ragans #50 of the Texas Rangers to score a run during the third inning at Globe Life Field on September 25, 2022 in Arlington, Texas. (Photo by Ron Jenkins

Five of rookie Steven Kwan's career-high five RBIs came on his first career grand slam in the eighth inning and Aaron Civale allowed two runs on three hits in five innings as the Guardians beat the Texas Rangers 10-4 on Sunday.

They clinched the division title about 15 minutes before their game ended, when the second-place Chicago White Sox lost to Detroit.

The Guardians have made it look easy recently, opening a 10-game lead with 10 days left. Tied for first going into Labor Day, Cleveland has won 18 of 21 games including the last seven.

Cleveland scored four runs in the third inning on four singles plus a throwing error and added two in the sixth on Gabriel Arias' triple following fielding errors by middle infielders Corey Seager and Marcus Semien.

In the eighth, Kwan's fly to deep right bounced off the back wall just behind the outfield fence and back onto the field. Kwan also singled in the third and seventh.

Civale (3-6) is 21-0 when provided at least three runs' support. He struck out seven and walked none throwing 75 pitches in his second start since returning from the injured list following forearm inflammation.

This is Cleveland's 11th Central title since the division's inception in 1994 and its fourth in 10 years under manager Terry Francona, who battled health problems the past two seasons but has enjoyed this ride with a team that may have surprised early on but is now being viewed as a legitimate World Series threat.

This season wasn't supposed to happen.

After dropping Indians as their nickname following the 2021 season, a move that rankled a sizable portion of Cleveland's fan base, the Guardians did little to upgrade their roster in free agency as the front office decided 2022 would be devoted to seeing what it had.

As it turned out, Cleveland's kids were more than all right. Maybe no one more so than Kwan, a fifth-round draft choice in 2018 who made the roster in spring training and has become the club's leadoff hitter.

Baseball's youngest team has defied the odds from the start. The Guardians won despite having 16 rookies make their major league debuts, and they've overcame a brutal schedule -- an MLB-high 11 doubleheaders -- due to Cleveland's sometimes nasty weather.

Texas' first run scored on a sacrifice fly by Adolis Garcia for his team-high 96th RBI. He sat out Saturday night's game after being hit in the left wrist by a pitch during the ninth inning of Friday night's game.

Rangers starter Cole Ragans (0-3), a rookie was called up in early August, allowed all four runs, three earned, on six hits in five innings. He struck out three and walked one.

Guardians RHP Shane Bieber (12-8, 2.81 ERA) will open a three-game series on Tuesday night at Tampa Bay in a possible preview of a first-round postseason series. Bieber will face RHP Corey Kluber (10-9, 4.30), a two-time Cy Young winner during his nine seasons in Cleveland.

The Rangers will play three games at Seattle beginning Tuesday night and haven't announced a starter for the series opener to go against LHP Robbie Ray (12-10, 3.60).