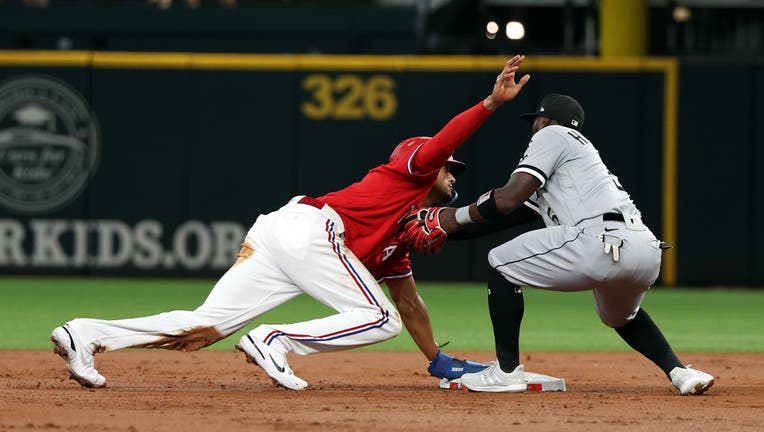 ARLINGTON, TEXAS - AUGUST 05: Bubba Thompson #65 of the Texas Rangers is safe after stealing second against Josh Harrison #5 of the Chicago White Sox in the second inning at Globe Life Field on August 05, 2022 in Arlington, Texas. (Photo by Richard R

The first start in August for Cease (12-4) resembled those of the past eight weeks, when he was selected the AL pitcher of the month for June and July. He gave up a run and two hits to lower his earned run average to 1.98, second in the AL, and won his fifth straight start.

Cease hasn't allowed more than one run in a game since June 9, when he was tagged for six unearned runs, and hasn't given up more than one earned run in any of his last 13 starts.

He gave up a first-inning run on back-to-back two-out walks and an opposite-field RBI single by Adolis Garcia. He had not allowed a first-inning run since July 2. Cease didn't allow a hit after Bubba Thompson's second-inning single. He struck out five and walked three, one after the first inning.

Chicago tied the score 1-1 in the third beginning with a four-pitch leadoff walk to Yasmani Grandal, who came in on an 0-for-21 slump. Grandal advanced to third on Josh Harrison's single that glanced off the glove of second baseman Marcus Semien and scored on a sacrifice fly by Seby Zavala.

Jimenez homered in the fourth to put Chicago ahead.

Kendall Graveman left the bases loaded in the eighth, retiring Leody Taveras on a first-pitch groundout to first base to end the inning. Liam Hendriks, the third White Sox reliever, pitched a perfect ninth for his 22nd save in 25 chances.

The Rangers have lost four of their last five games and fell back to 12 games under .500 to match their season low. They are a majors-worst 6-24 in one-run games.

Glenn Otto (4-8) gave up two runs and four hits in six innings while matching a career high with seven strikeouts. Otto is 0-6 in eight starts since returning from the COVID-19 related injury list.

White Sox: RHP Reynaldo Lopez (back) is scheduled to pitch a simulated game on Saturday. "My understanding is he's four or five days away from being ready," manager Tony La Russa said.

Rangers: INF-OF Brad Miller (neck strain) was activated from the 10-day injured list. Miller was the DH on Friday, his first action since July 17, and went 0 for 3. To make room for him on the active roster, INF-OF Nick Solak was optioned to Triple-A Round Rock.