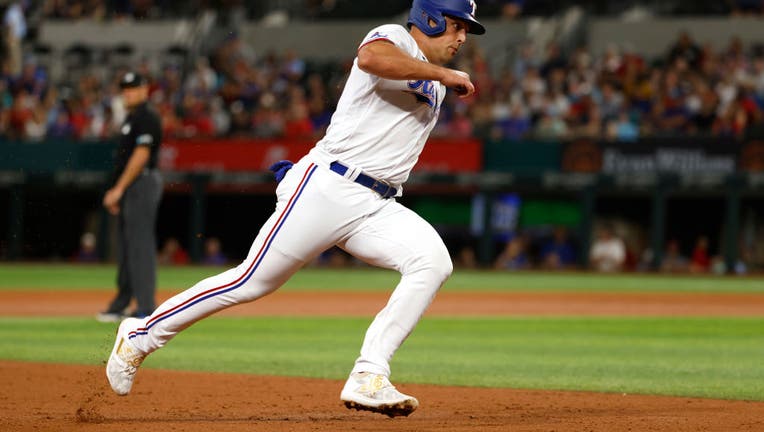 ARLINGTON, TX - AUGUST 4: Nathaniel Lowe #30 of the Texas Rangers rounds third base on his way to score a run against the Chicago White Sox during the second inning at Globe Life Field on August 4, 2022 in Arlington, Texas. (Photo by Ron Jenkins/Gett

ARLINGTON, Texas (AP) - Meibrys Viloria had a tiebreaking pinch-hit single in the seventh inning and Texas beat the Chicago White Sox 3-2 on Thursday night, when the Rangers became the first team since 1986 to have two of its first-round picks make their big league debuts as starters in the same game.

Left-hander Cole Ragans, who twice had Tommy John surgery after being their first-round pick in 2016, allowed one unearned run over five innings in his debut. Bubba Thompson, the team's first pick in 2017, was 1 for 3 with a bunt single in his first big league game after being called up earlier in the day to play left field and bat ninth.

Brock Burke (5-2) struck out four in two scoreless innings after taking over for Ragans, who struck out three, walked four and allowed three singles in a 93-pitch debut. Jonathan Hernandez pitched the ninth for his second save in two chances.

Leody Taveras had an RBI single for the Rangers, who ended a seven-game home losing streak. That hit in the second inning came after Nathaniel Lowe extended his hitting streak to 11 games with the first of his two doubles.

White Sox starter Johnny Cueto (4-5), unbeaten in his last six starts, gave up three runs and 11 hits. He struck out four without a walk while pitching the entire game.

Texas had two on with one out in the seventh when Viloria singled up the middle to make it 2-1 when hitting for struggling third baseman Ezequiel Duran, in a 3-for-30 slide after striking out in both of his at-bats. Thompson then had a bunt single to load the bases before Marcus Semien's sacrifice fly.

Yoan Moncada had a two-out RBI triple for the White Sox in the eighth before Thompson made a running catch to end that inning.

The debuts by Ragans and Thompson came after the Rangers formally introduced 2022 first-round pick Kumar Rocker at the ballpark earlier in the day.

Ragans started after Texas put Jon Gray on the injured list with a left oblique strain. The 24-year-old lefty was 8-5 with a 3.04 ERA in 18 starts combined at Triple-A Round Rock and Double-A Frisco.

The last time two former first-round picks drafted by the same club made their MLB debuts in the same game was April 8, 1986, when first baseman Will Clark and second baseman Robby Thompson debuted together for the San Francisco Giants at Houston.

Chicago got its run in the third, when Luis Robert had a leadoff walk before going to third after right fielder Adolis Garcia's error on a dropped flyball that initially was ruled a catch before the White Sox challenged. Replay showed that Garcia never had control, and that the drop wasn't caused by him trying to transfer the ball from the glove to his hand. Robert scored on Andrew Vaughn's fielder's choice comebacker.

White Sox: Robert was the DH in his first game since July 15, before the center fielder went on the injured list because of blurred vision caused by a virus. He had been activated from the injured list Tuesday but is being eased back into action.

Rangers: OF Kole Calhoun (right heel irritation) was placed on the 10-day injured list, and RHP Dennis Santana (left ankle sprain) was put on the 15-day IL. That cleared spots on the active roster for Ragans and Thompson, but Steven Duggar and Steele Walker, both outfielders at Triple-A Round Rock, were designated for assignment to make room on the 40-man roster.

White Sox right-hander Dylan Cease (11-4, 2.01 ERA) makes his first start in August after being the American League's pitcher of the month in June and July. He has won his last four starts, not given up more than one run in his last nine. Rangers right-hander Glenn Otto (4-7) is 0-5 with a 7.11 ERA in seven starts since his return from the COVID-19 related IL.