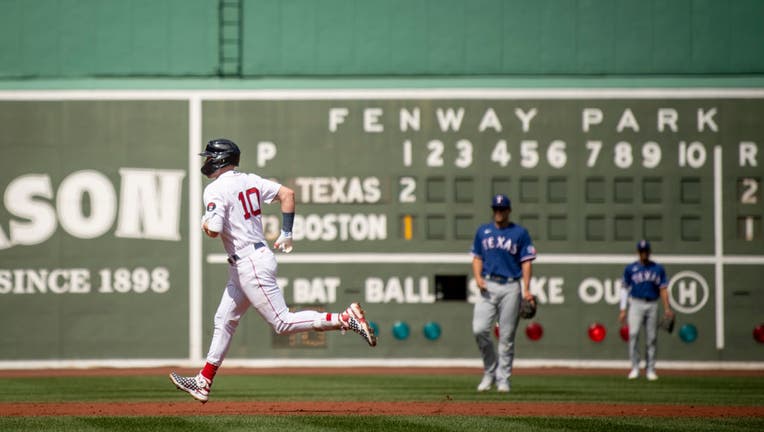 BOSTON, MA - SEPTEMBER 4: Trevor Story #10 of the Boston Red Sox runs after hitting a three-run home run during the first inning of a game against the Texas Rangers on September 4, 2022 at Fenway Park in Boston, Massachusetts. (Photo by Maddie Malhot

BOSTON (AP) - Trevor Story hit a three-run homer over the Green Monster, Xander Bogaerts had his eighth straight multi-hit game and the Boston Red Sox completed a four-game sweep over Texas with a 5-2 victory on Sunday.

The Red Sox now have a five-game winning streak as they're trying to climb back into the AL's wild-card chase. The Rangers have lost eight straight.

Bogaerts, who can opt out of his contract after this season, had an RBI double and run-scoring single in his three hits. His stretch is the longest for a Boston player since Kevin Youkilis tied the club record with nine in 2007.

Adolis Garcia had an RBI double for Texas, which lost for the 15th time in its last 18 games in Fenway Park and fell to a season-worst 17 games under .500. It's the Rangers' longest skid since a 12-gamer last season.

Boston's highly touted prospect Triston Casas made his major-league debut, going 1 for 4 with an infield single and had a nice backhand stab of a hard grounder playing first.

Reliever Kaleb Ort (1-1) was credited with his first MLB victory, getting five outs after starter Josh Winckowski was pulled with the Red Sox leading after four innings. John Schreiber got the final three outs for his seventh save.

Rangers starter Dane Dunning (3-8) took the loss and is winless in his last 26 road starts, the majors' longest active streak. His only career road victory came Sept. 9, 2020 with the White Sox. Dunning gave up five runs on eight hits in four innings.

Story had three hits Sunday, including when he drove a low, inside sinker into the second row of seats during a four-run first inning. Bogaerts' double made it 1-0 after Texas scored twice.

Bogaerts added an RBI single in the second.

Story made a leaping grab of Jonah Heim's liner and a nice swipe tag on the foot of Leody Taveras, who was attempting to steal second. Both plays came in the sixth.

The Rangers designated LHP Dallas Keuchel before the game and recalled LHP John King from Triple-A Round Rock.

Rangers: LHP Martin Perez (10-5, 2.89 ERA) is slated to start the opener of a three-game series in Houston Monday. RHP Hunter Brown is scheduled to make his major-league debut for the Astros.

Red Sox: RHP Michael Wacha (10-1, 2.56) looks to keep his current solid run going Monday at the Tampa Bay Rays. He has a 2.19 ERA in four starts after coming off the IL on August 14 following a stint with right shoulder inflammation. The Rays' starter is TBD.