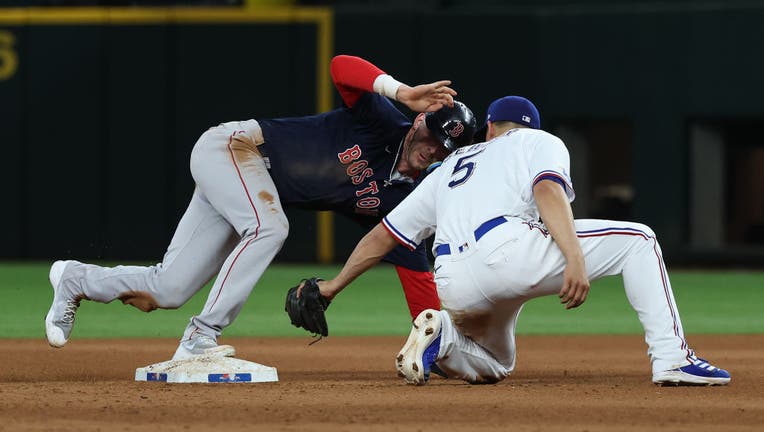 ARLINGTON, TEXAS - MAY 14: Trevor Story #10 of the Boston Red Sox steals second ahead of the tag by Corey Seager #5 of the Texas Rangers in the fifth inning at Globe Life Field on May 14, 2022 in Arlington, Texas. (Photo by Richard Rodriguez/Getty Im

ARLINGTON, Texas (AP) - Alex Cora has never wavered on knowing that the Boston Red Sox are a good team, despite their early struggles and being at the bottom of the AL East standings.

"Nothing has changed," Cora said. "Just we got off to a bad start, and we know where we’re at."

The Red Sox now seem to be making a move in the right direction. They have their first series victory in a month.

J.D. Martinez extended his on-base streak to 31 games with a first-inning homer, 42-year-old Rich Hill pitched into the seventh in his return from the COVID-19 list and the Red Sox won 11-3 over the Texas Rangers on Saturday night.

"We’re getting there," Cora said. "Good at-bats. Bottom of the lineup did an amazing job. ... Kept the line moving. It was another good one for the offense."

Kiké Hernández drove in three runs — with a sacrifice fly in the second inning, a fielder's choice grounder in the fourth and a double in the fifth.

The Red Sox (13-20) had only won one of their first 10 series, taking two of three at Detroit from April 11-13 during the first week of the season. They had gone 0-6-2 in their series since, including splitting two games at World Series champion Atlanta earlier this week.

Hill (1-1) threw 64 of his 94 pitches for strikes in his first start since May 5. The left-hander, who during his quarantine threw alone on a couple of otherwise empty fields near his home, struck out four without a walk. He allowed three runs and seven hits, the last

"I was pretty much full go," said Hill, who also threw into a net at home. "I went out there by myself and just, I kind of looked crazy, but I was I was staying ready."

Otto had four strikeouts and four walks while pitching into the fifth. He gave up eight runs and eight hits.

Texas got even in the bottom of the first when leadoff hitter Eli White reached on second baseman Trevor Story's error, then stole second and third base before going home on Corey Seager's single. Seager had been 3 for 28, all of those hits solo homers, his previous eight games. But the Rangers were down 9-1 before getting another run off Hill.

"You let him get comfortable, and he starts spinning the baseball like he does, he’s tough," Texas manager Chris Woodward said.

The Red Sox took control with a four-run second inning capped by Devers' two-run homer, an opposite-field liner that ricocheted off the left field pole for a 5-1 lead.

"I know they’ve been struggling coming in as far as the win-loss column," Woodward said. "That team has been together for a while and got some really good hitters over there. They just kicked our butts. That's the bottom line."

Boston has scored 30 runs its last four games, after 23 runs combined the 10 games before that. ... The most runs the Rangers had allowed was in a 10-8 loss at Toronto when they blew an early 7-0 lead in the season opener. ... Marcus Semien is batting .156 in his first season with Texas, and is 0-for-25 over his last six-plus games. ... Public address announcer Chuck Morgan worked his 3,100th consecutive regular-season game since 1983. All but 81 of those games have been with Texas, which is playing in its third stadium during that span. Morgan spent the 2002 season with the Kansas City Royals.

Red Sox: LF Alex Verdugo was out of the lineup with a bruised right foot. He exited in the seventh inning of Friday's game after fouling a pitch off his foot. Cora said Verdugo was still feeling some pain, but that X-rays came back negative.

Rangers: RHP Jon Gray will wear a brace on his left knee when he starts against the Los Angeles Angels on Monday, exactly a week after leaving his last start with a knee strain. Gray got through a bullpen session Saturday without any issues.

Rangers left-hander Martin Perez (1-2, 2.10 ERA), who has allowed only two earned runs over 26 1/3 innings (0.68 ERA) his last four starts after losing his first two, goes in the season finale against Boston. He pitched for the Red Sox the past two seasons before rejoining his original MLB team this spring.