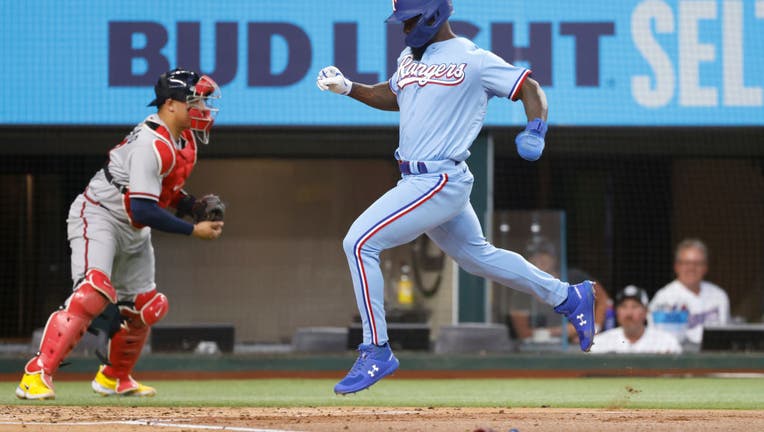 ARLINGTON, TX - MAY 1: Adolis Garcia #53 of the Texas Rangers scores a run from third base against the Atlanta Braves during the first inning at Globe Life Field on May 1, 2022 in Arlington, Texas. (Photo by Ron Jenkins/Getty Images)

ARLINGTON, Texas (AP) - Adolis Garcia highlighted a three-hit, four-RBI day with a bases-clearing triple in the third inning to help the Texas Rangers beat the Atlanta Braves 7-3 on Sunday.

Taylor Hearn (1-2) allowed both runs on four hits and three walks in five innings for his first victory since Sept. 12 of last season. Atlanta added two singles in the final four innings off three relievers.

The Rangers went 3-4 in a homestand against last year's World Series teams -- 2-1 vs. Atlanta and 1-3 against the Houston Astros. The Braves have lost two straight for the fifth time this season, their longest losing streak.

The Rangers took advantage of wildness by Dallas native Kyle Muller (0-1), who was recalled from Triple-A Gwinnett and made his first start of the season. Muller walked six and allowed four singles in 2 2/3 innings to go with two stolen bases allowed and a wild pitch. Texas scored earlier in the inning on a safety-squeeze bunt by Charlie Culberson.

Muller gave way to Jesse Chavez with two out and the bases loaded in the third inning. Garcia lined a 2-2 sinker to the opposite field that right fielder Travis Demeritte failed to catch or trap on a dive. The ball rolled to the wall to score three.

One of Muller's walks came on a check swing by Eli White in the second inning that apparently upset Braves pitching coach Rick Krantz. After Krantz visited the mound, he chatted with home plate umpire Cory Blaster, was ejected, and their conversation continued and became heated.

Hearn -- from Royse City, about 50 miles east of Arlington -- matched a season high with five innings and threw a season-most 89 pitches.

Dansby Swanson went 2 for 4 with a double to the warning track in center field that was part of the Braves' two-run third inning and added a sacrifice fly in the ninth.

The announced sellout crowd of 38,316 - which included former President George W. Bush - was the largest at Globe Life Field, which opened in 2020 and began accommodating full capacity last year. The previous mark was the 2021 opening day gathering of 38,238.

With the Braves' recall of Muller, RHP Bryce Elder, the resident of nearby Decatur, Texas who started Saturday night's game, was optioned to Gwinnett. Elder won his big-league debut on April 12, then lost three straight and allowed seven runs in 12 innings.

Rangers: RHP Josh Sborz (elbow) made his second rehab outing for Round Rock on Sunday, throwing 24 pitches in 1 2/3 innings.

Rangers: RHP Jon Gray (0-1, 7.00) will make his third start of the season, each previous one followed by a trip to the injured list (blister, knee) to open a two-game set at Philadelphia on Tuesday. The Phillies will start LHP Ranger Suarez (2-0, 4.41) and are 4-0 in his starts this season.