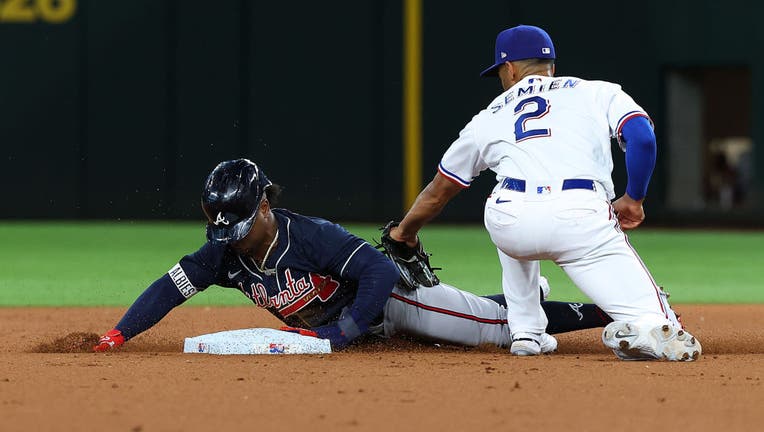 ARLINGTON, TEXAS - APRIL 29: Ozzie Albies #1 of the Atlanta Braves steals second as Marcus Semien #2 of the Texas Rangers is late with the tag in the first inning at Globe Life Field on April 29, 2022 in Arlington, Texas. (Photo by Richard Rodriguez/

ARLINGTON, Texas (AP) - The Atlanta Braves had quite a bash on Ron Washington's 70th birthday.

William Contreras hit two impressively long home runs, Austin Riley also connected and Travis Demeritte had an inside-the-park homer when he was emphatically waved home by the beloved third-base coach as the Braves beat the Texas Rangers 6-3 on Friday night.

Washington's birthday came on the day Atlanta opened the series in Texas, where the baseball lifer was the manager of the Rangers for their only World Series appearances in 2010 and 2011. He finally got a championship ring last year with the Braves, and was showing that off on the field before the game.

"I was trying to think when I was a third base coach, if I had one of those, I tell you, it spends a lot of energy, even on Wash doing that," manager Brian Snitker said of the inside-the-parker. "He’s amazing to me. I told him there’s no way you’ll catch me out there at 70 years old."

Atlanta went ahead to stay after Demeritte led off the game with a single and Riley hit his sixth homer, a 424-foot shot over the center-field wall against Garrett Richards (0-1), the first of six Texas pitchers.

When Demeritte led off again in the third, Adolis Garcia initially turned the wrong way in center field. By time Garcia recovered and lunged about 40 feet from the wall, the ball hit the ground right in front of him, then ricocheted off his glove and away from him toward the warning track.

"He kind of had a beat on it, so I was just kind of tracking him," said Demeritte, who then noticed Garcia turn back. "I kind of knew he was having a little trouble with it. ... It clicked with me. I was like, all right, I'm going to for it."

Especially when he neared third base and Washington had his arm in an all-out windmill motion.

"Loosen up that rotator cuff, baby," said Demeritte, who slid headfirst and remained on the plate momentarily while catching his breath.

While the four Atlanta homers came off four different Rangers pitchers, Braves right-hander Ian Anderson (2-1) allowed two runs and three hits with five strikeouts and two walks over six innings. Kenley Jansen worked the ninth for his sixth save in as many opportunities.

Contreras hit both of his solo shots to center, a 429-foot drive leading off the third, and a 435-footer in the sixth that made it 6-1 and included a salute from Washington as he rounded third. Those were the first homers this season for Contreras, and his first career multihomer game.

Garcia and Corey Seager homered for Texas, which lost its fourth game in a row.

"We’ve got to get back to just playing baseball. Listen, we have a great group. We had a blast in spring training and we had a blast coming out of camp," said manager Chris Woodward, adding his 6-14 team has since gotten a bit tight. "We have to stop stressing so much. ... We’ve got to play free out there."

When the base coaches were introduced before the top of the first inning, Washington got a loud ovation from the crowd, and tapped his heart in a show of appreciation. When his birthday was noted on the big video boards before the second, there was an even louder response from the fans and the Texas manager from 2007-14 tipped his helmet toward them. He is the franchise's winningest manager with 664 wins.

"I had three opportunities in the World Series and I finally got one. So it’s very special. I mean, my heart is broken that I (wasn't) able to get one here in Texas, and we had two opportunities at it," Washington said before the game. "But, you know, when things don’t work out the way you want them to work out, you’ve got to pick up the pieces and you’ve got to move on. The Lord blessed me to be fortunate enough to be in Atlanta."

Braves: Ronald Acuña Jr. was out of the Braves lineup as planned, a day after going 1 for 5 with a pair of stolen bases in his return from a torn ACL in his right knee less than 10 months after the injury. The outfielder is expected to play Saturday night, but not in the series finale Sunday. That will be a day game after a night game and a travel day, two of the scenarios in which the Braves say he won’t play for now.

Rangers: RHP Jon Gray (left knee sprain) threw live BP before the game. He is expected to throw at least one more time before the team will decide if he’s ready to come off 10-day injured list. ... Co-pitching coach Doug Mathis has entered COVID-19 protocol and was away from the team.

Rookie right-hander Bryce Elder (1-2, 4.30 ERA), who grew in Decatur, Texas, only about an hour from Globe Life Field, starts Saturday night for the Braves. Atlanta got him in the fifth round of the 2020 draft out of the University of Texas. Right-hander Dane Dunning (0-1, 4.91) goes for the Rangers.