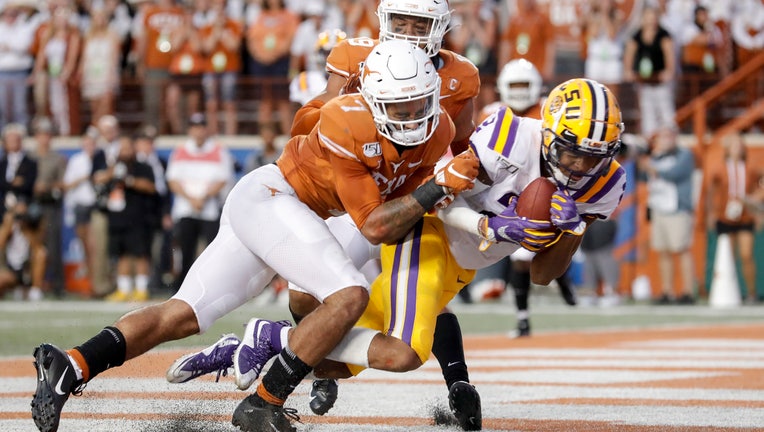 Justin Jefferson #2 of the LSU Tigers catches a pass for a touchdown defended by Caden Sterns #7 of the Texas Longhorns in the second quarter at Darrell K Royal-Texas Memorial Stadium on September 7, 2019 in Austin, Texas. (Photo by Tim Warner/Getty

AUSTIN, Texas - Texas spent time rebuilding its defense in the offseason only to see it shredded by LSU over the weekend.

The Longhorns surrendered 471 yards passing and four touchdowns in a 48-35 loss in which Texas fought back from an early deficit but forced only one punt in the second half.

Coach Tom Herman brushed aside questions Monday about Texas' inability to slow down Tigers quarterback Joe Burrow and what it could mean when the Longhorns start their Big 12 schedule in a couple of weeks. No. 12 Texas (1-1) plays at Rice (0-2) Saturday in the non-conference finale.

Texas has eight new starters on defense, most notably at both cornerback positions in front of experienced safeties. The Longhorns have also lacked a pass rush from its line and has needed to blitz linebackers and defensive backs to get to the quarterback.

"We've got talented players that care," Herman said. "We've got to do better. We're going to face really good receivers and quarterbacks in (the Big 12). We're not ready to sound all the alarms yet."

Before the game, Texas and LSU players did a good bit of jawing about which was the real "DBU" (Defensive Back University). Both units got picked apart by Burrow and Texas quarterback Sam Ehlinger.

Good passing teams have been able to exploit defensive coordinator Todd Orlando's defense the past two seasons for big chucks of yardage. Herman will typically shrug off stats like total passing yards if his defense can get off the field on third down and keep opponents out of the end zone.

Neither happened against LSU.

The Tigers punted just twice and scored 24 points on four straight possessions in the second half before running out the final 22 seconds. And when Texas had LSU facing third-and-17 with less than 3 minutes to play, Burrow avoided a blitz and connected with Justin Jefferson for a 61-yard, tackle-breaking touchdown, his third of the game.

Herman bristles at any second-guessing of play calling and said he had no regrets about the blitz call that left Jefferson in single coverage against Texas safety Caden Sterns, who was first-team All-Big 12 last season. Sterns was beaten badly on the play.

"We felt like we made the right call at the time," Herman said. "(Burrow) was jumping, falling on one of his offensive linemen and threw it right in the receiver's hands."

A new problem for Texas is that nickel back B.J. Foster, who leads the team with two sacks, will be out for an extended time with a "significant" hamstring injury suffered late against LSU. Foster had sacked Burrow just before the Tigers' game-clinching touchdown.

"The good thing is that's by far the deepest position on the team," Herman said.