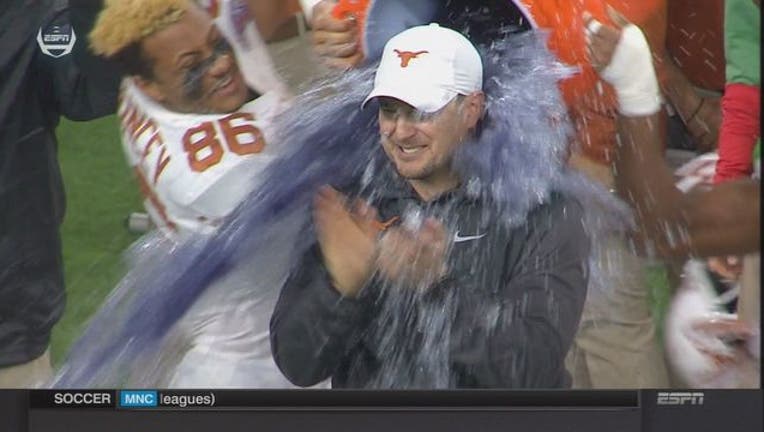 HOUSTON (AP) - Freshman running back Daniel Young had 64 yards receiving with a touchdown and added 48 yards on the ground to help Texas beat Missouri 33-16 in the Texas Bowl on Wednesday night.

The Longhorns (7-6), in a bowl for the first time since 2014, bounced back from a loss to Texas Tech in their regular-season finale to finish with their first winning record since going 8-5 in Mack Brown's final season in 2013.

Shane Buechele and Sam Ehlinger split time at quarterback for Texas, and both players threw a touchdown pass. The defense helped out, too, with Anthony Wheeler scoring a TD on a fumble return in the first half and Davante Davis grabbing an interception with about three minutes left in the fourth quarter.

Armanti Foreman dashed 18 yards for a touchdown on the ensuing drive to extend the lead to 33-16 and put the game out of reach.

Drew Lock passed for 269 yards and a touchdown, but also threw an interception and lost a fumble in the loss, which snapped a six-game winning streak for the Tigers. Lock led the nation during the regular season with a Southeastern Conference-record 43 touchdown passes and he had thrown three or more in eight straight games.

Buechele connected with Young on a 22-yard touchdown pass to put Texas up 7-0 early in the first quarter. Ehlinger found John Burt for a 7-yard score later in the first to push the lead to 14-0.

Lock threw a 79-yard touchdown pass to Johnathon Johnson on the first play of the second half, but the 2-point conversion failed, leaving the Tigers down 21-13.

They cut the margin to 21-16 with a 28-yard field goal by Tucker McCann with about three minutes left in the third quarter, but weren't able to move the ball much after that.

The Longhorns went up 23-16 when a bad snap sailed over Lock's head and rolled out of the back of the end zone for a safety near the end of the third quarter.

Texas: Coach Tom Herman's first season with the Longhorns was somewhat of a disappointment, but his team's performance against Missouri should give fans hope that the program is back on the right track.

Missouri: Texas found a way to stymie Missouri's potent offense after the Tigers scored 45 or more points in each of their previous six games, a school record.

Texas: Herman appears to have two improving quarterbacks in Buechele and Ehlinger, but to develop more consistency next season the coach might need to pick one as his starter and stick with him.