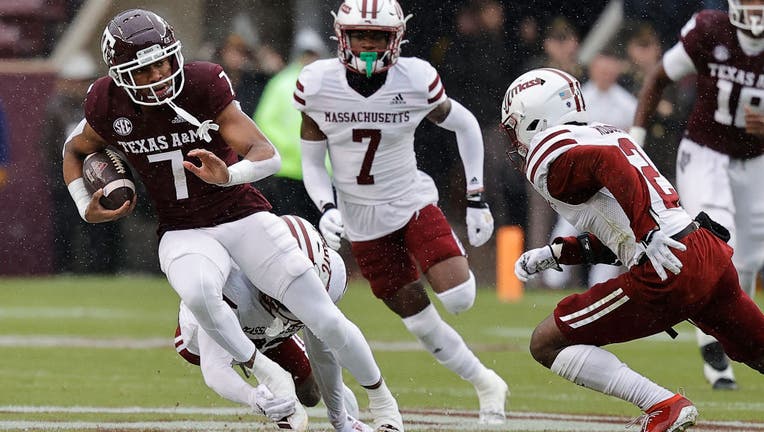 COLLEGE STATION, TEXAS - NOVEMBER 19: Moose Muhammad III #7 of the Texas A&amp;M Aggies runs with the ball after a catch against the Massachusetts Minutemen during the first quarter at Kyle Field on November 19, 2022 in College Station, Texas. (P

COLLEGE STATION, Tex. (AP) - Conner Weigman threw for 191 yards and a touchdown and Texas A&M overcame a sloppy and mistake-filled performance to snap a six-game skid with a 20-3 win over UMass Saturday.

Texas A&M (4-7) entered the game as 33 ½ point favorites against the Minutemen, who have won just one game this season. But the Aggies lost four fumbles and struggled to move the ball while playing without top running back Devon Achane and leading receiver Evan Stewart on a soggy and cold day.

Weigman threw a touchdown pass in the second quarter to put A&M on top. The Aggies didn't get in the end zone again until Le'Veon Moss scampered 12 yards for a touchdown with about five minutes remaining to stretch the lead to 20-3.

The school announced a paid attendance of more than 90,000, but the crowd in the cavernous stadium looked sparse from the start and morphed into a ghost town by the third quarter as light rain steadily fell.

It was a far cry from the atmosphere when the Aggies opened the season ranked No. 6 in the country with designs on competing for a national title. They've not only tumbled out of the poll since then but won't even make a bowl game this season, raising questions about the $75 million contract of coach Jimbo Fisher.

Saturday's win is A&M's first since Sept. 24 to end the school's longest losing streak since 1972. It came as the Aggies took a break from the rigors of SEC play for a matchup with UMass (1-10), which is an independent team. Texas A&M will end this dreadful season next weekend with a visit from sixth-ranked LSU.

Kay'Ron Adams ran for 58 yards and Ellis Merriweather added 47 yards rushing for UMass, which lost its eighth consecutive game since a win over Stony Brook on Sept. 17.

Texas A&M extended the lead to 13-3 on a 35-yard field goal by Randy Bond with about eight minutes left in the third quarter. He missed from 45 yards early in the fourth quarter.

Texas A&M put together a nice drive after that, but Moose Muhammed fumbled after a 45-yard reception, and it was recovered by the Minutemen on their 14.

UMass couldn't cash in on the error and had to punt four plays later.

The Aggies took the lead later in the second when Weigman connected with Noah Thomas on a 22-yard TD pass that made it 10-3.

Texas A&M had a shot to add to the lead late in the second, but Weigman fumbled as he pulled back his arm to throw in the wet weather. The Aggies recovered, but Bond's 47-yard field goal attempt was short.

UMass: The Minutemen might have played their best game all season in staying close with the Aggies. They'll hope to build on the performance next week to try and end their skid.

Texas A&M: The Aggies will have to play much better next week on both sides of the ball if they expect to compete with the Tigers.