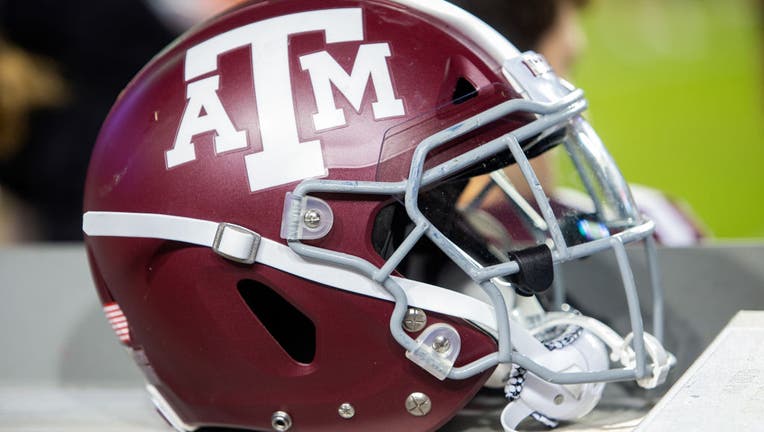 BATON ROUGE, LA - NOVEMBER 30: A Texas A&amp;M helmet rests on the sideline during a game between the LSU Tigers and the Texas A&amp;M Aggies on November 30, 2019, at Tiger Stadium in Baton Rouge, Louisiana.. (Photo by John Korduner/Icon Spor

STARKVILLE, Miss. (AP) - Mississippi State forced No. 17 Texas A&M into four turnovers, including three inside the red zone, and the Bulldogs took advantage in a 42-24 victory on Saturday.

Decamerion Richardson scooped up Emmanuel Forbes' critical third-quarter blocked field goal and returned it 50 yards for the touchdown to give the Bulldogs a 21-3 lead. The Aggies (3-2, 1-1 Southeastern Conference) got no closer to 11 as MSU's defense denied A&M inside the 20 all game long with big plays inside its 20.

The first came early in the second quarter when Devon Achane fumbled on the 6. MSU responded with a 94-yard, 11-play drive ending with Will Rogers' 5-yard touchdown pass to Rufus Harvey.

Leading 14-0 just before halftime, the Bulldogs defense came through again as Nathaniel Watson forced Aggies quarterback Max Johnson to fumble inside the red zone. Forbes' blocked field goal in the third quarter put an exclamation point on the game for MSU and their first SEC West win.

Meanwhile, the Aggies were frustrated on offense. Johnson was 18 of 25 for 201 yards and a touchdown before leaving in the fourth quarter with a hand injury. MSU sacked Johnson four times and posted six tackles for loss, led by 1.5 sacks by backup linebacker JP Purvis.

Forbes then made two interceptions late in the fourth quarter and capped the game with a pick-six.

Texas A&M continues a lackluster start to the year, which has included a loss at home to Appalachian State and now on the road to the Bulldogs. Jimbo Fisher's offense has taken a lot of the criticism early, and Saturday only added to it as the Aggies struggled again.

Mississippi State was on the verge of the Top 25 when the Bulldogs went to Baton Rouge against LSU but missed a chance for the win. After consecutive wins including a victory over the ranked Aggies, MSU is once again a team to watch in a crowded SEC West.