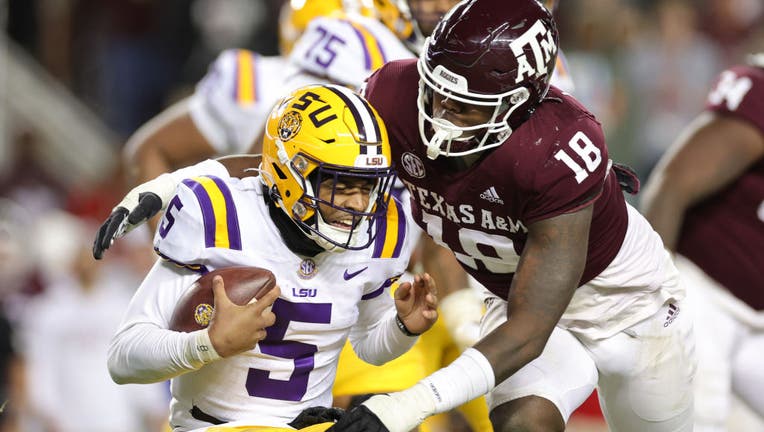 COLLEGE STATION, TEXAS - NOVEMBER 26: Jayden Daniels #5 of the LSU Tigers rushes from pressure from LT Overton #18 of the Texas A&amp;M Aggies during the second half at Kyle Field on November 26, 2022 in College Station, Texas. (Photo by Carmen M

Instead, Devon Achane had a career-best 215 yards rushing with two touchdowns, and Texas A&M stunned LSU 38-23, all but certainly knocking the Tigers out of contention for the CFP.

"They have done some incredible things and I don’t want this loss to at all take away from what they’ve accomplished this year," LSU coach Brian Kelly said. "This was not a step back. This was a bump in the road and they’re going to learn from it."

Conner Weigman threw two TD passes for the Aggies (5-7, 2-6 SEC) and Demani Richardson returned a fumble for a score. The game was tied at 17-all in the third quarter before A&M scored 21 straight points.

"It shows the type of team we can be," Achane said. "Just showing that it wasn’t the season we wanted but came out to beat a top-(10) team."

LSU (9-3, 6-2, No. 5 CFP) had already won the SEC West and secured chance to play for the conference title against unbeaten No. 1 Georgia, and a win there could have put the Tigers in the playoff. But with three losses, even beating the Bulldogs likely won't be enough.

Kelly said he didn't think his team overlooked the Aggies.

"We just needed more juice, more fire and we just seemed to lack that today and that’s on me," Kelly said.

"There’s not a secret to this," Texas A&M coach Jimbo Fisher said. "Just go do your job. There’s no magical formula."

"Their best players played to their level today," Kelly said. "We didn’t match it. Our best players needed to make great plays and we fell short in that area."

But Edgerrin Cooper hit Jayden Daniels and forced him to fumble on LSU’s next drive. Richardson scooped it up and dashed 37 yards for his second touchdown this season to put A&M on top 24-17 with about seven minutes left in the third quarter.

"I think there was some momentum swing there," Kelly said. "I don’t know if we ever really recovered from it."

The Aggies extended the lead to 31-17 on the first play of the fourth quarter when Moose Muhammad reeled in a 21-yard TD catch with one hand.

A 10-yard run by Achane, who returned after missing two games with a foot injury, made it 38-17 with about eight minutes to go.

A rowdy crowd of more than 93,000 fans packed Kyle Field and some began to rush the field with about 17 seconds left, causing a delay. It was a stark difference from last week, when most of the crowd emptied out after halftime on a wet and cold day.

Those fans and several thousand more poured onto the field when time expired.

Daniels threw for 189 yards and ran for 84 more and Emery had three touchdowns for the Tigers, who lost their first game since they fell 40-13 at home to Tennessee on Oct. 8.

Daniels nearly connected with Jaray Jenkins in the end zone on fourth down on LSU’s next possession, but Tyreek Chappell knocked the ball out of Jenkins' hands. The Aggies then ran out the clock.

LSU: With their playoff chances all but nonexistent, Kelly's Tigers will have to put this one behind them quickly if they hope to compete with the Bulldogs.

Texas A&M: The Aggies showed they have plenty of talent to compete with teams at the top of the SEC. The question is why Fisher's team couldn’t put it together earlier in the year. The Aggies hadn't won an SEC game since beating Arkansas on Sept. 24.

Achane said after the game that he hasn't decided if he'll return for his senior season or declare for the NFL draft.

LSU: Plays Georgia in the SEC championship game next Saturday.

Texas A&M: Will try to move on from this disappointing season.