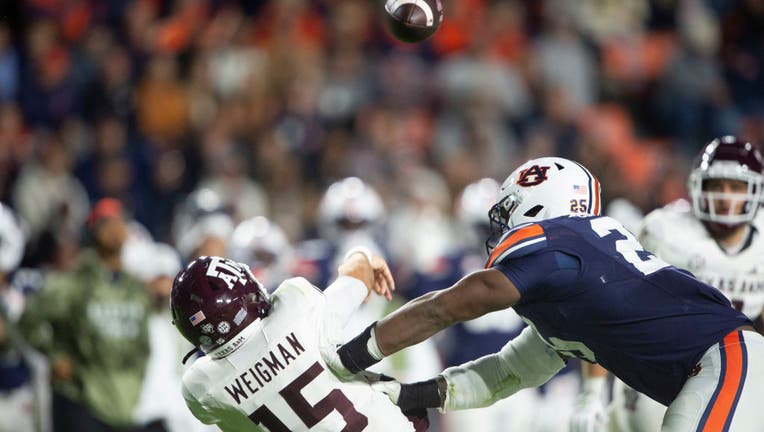 AUBURN, ALABAMA - NOVEMBER 12: Quarterback Conner Weigman #15 of the Texas A&amp;M Aggies throw the ball while being sacked by defensive end Colby Wooden #25 of the Auburn Tigers during the second half of play at Jordan-Hare Stadium on November 1

Jarquez Hunter and Tank Bigsby each rushed for 121 yards and Williams' Auburn team held on for a 13-10 victory over Texas A&M Saturday night, in a battle of teams tied for last in their division.

It was the Tigers' second game under their interim coach, who admitted he was "scared as a puppy" in his debut. Game 2 ended with a win and a Gatorade bath for Williams, drenching him and his shoes on a chilly night.

Now, the former Auburn and NFL running back has a win under his belt.

Auburn and the Aggies (3-7, 1-6) had been bringing up the rear in the Western Division and both had lost five straight. The offensive woes continued, especially for Texas A&M — until the final drive.

Freshman Conner Weigman and tailback Amari Daniels quickly moved the Aggies down the field. Weigman completed a 17-yard touchdown pass to Jalen Preston with 1:33 left and Daniels had a 27-yard run.

But Auburn recovered the onside kick and ran out the clock to end its losing streak, which had been the final straw in coach Bryan Harsin's tenure.

"When coach (Williams) got the job, the building changed," Bigsby said, saying he brought an energy that had been lacking.

The 215 yards were the fewest Auburn had allowed in an SEC win since the 2011 Florida game. And Wooden delivered the biggest moment, with Morris Joseph Jr. recovering the fumble.

"Big time play by Colby," Williams said. "I mean, wow. Tempers were flying. You could tell guys started barking at the offense. We kind of stalled in that third quarter.

"They had some momentum there. To get that strip fumble was bigtime."

Before that last drive, Texas A&M had just 5 total yards in the second half. The Aggies finished with were without leading rusher Devon Achane, who was wearing a boot on his left foot, and wide receiver Moose Muhammad. Coach Jimbo Fisher said Muhammad was out because of "internal issues."

McPherson, who made his first career start in place of an injured Anders Carlson, made a 26-yarder with 3:02 left.

Quarterback Robby Ashford led a celebration with fans afterward and players emptied a cooler of sports drink on Williams.

Weigman, a five-star recruit, made his second start in three games but couldn't duplicate his 338-yard, four-touchdown performance against Mississippi. He was 14-of-36 passing for 121 yards and had 13 consecutive incompletions in the second half.

Weigman missed the Florida game with an illness.

"First time ever in my life," Fisher said. "It's disappointing. But we've got to go back to work and fix it and get better."

Texas A&M: The offense sputtered even worse than usual, actually losing 16 yards collectively on five drives that started in the third quarter. It was another blow for coach Jimbo Fisher, whose team started out ranked No. 6.

Auburn: It was a cathartic moment for Auburn fans who endured Harsin's 9-12 tenure and struggles in league and other Power 5 games. Williams' first game running the show ended in an overtime loss at Mississippi State.