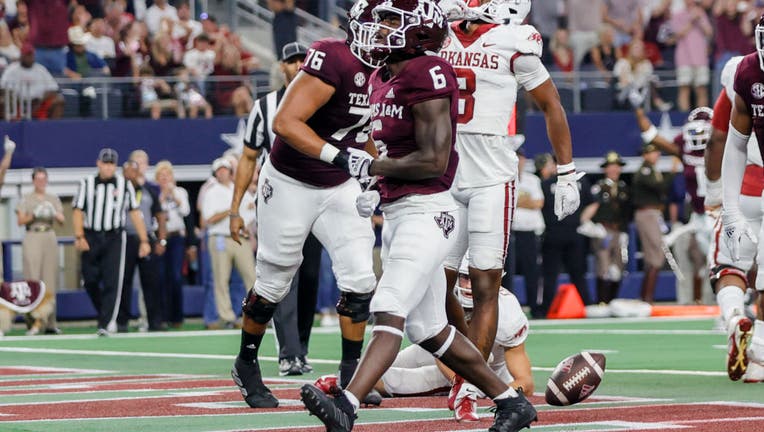 ARLINGTON, Texas (AP) - Demani Richardson got the ball just like he wanted, and the defensive back sprinted the final 82 yards down the sideline on a wild fumble return touchdown for No. 23 Texas A&M.

Richardson had the big return while Acane ran for 159 yards and a touchdown as Texas A&M scored 23 consecutive points after falling behind early, eventually beating the 10th-ranked Razorbacks 23-21 on Saturday night.

KJ Jefferson lost the ball when inexplicably trying to leap over the blocking linemen on a first-down play from 3 when Arkansas had a chance for a 21-7 lead late in the first half. The Arkansas quarterback instead ended up going straight up and the ball was knocked out of his hands by linebacker Chris Russell.

"We can’t do that on first down. If it was fourth down, that’s a different story. Unfortunately, it just got popped out," Razorbacks coach Sam Pittman said. "He wanted to score, and that happened."

Tyreek Chappell picked the ball out of the air, but he found himself in the standing grasp of running back Raheim Sanders near the 20, he handed the ball to Richardson — who was calling for the ball, and later said he would have taken it had it not been handed to him.

"I don't know if it saved us, but it made it a lot easier to win," Texas A&M coach Jimbo Fisher said.

The Razorbacks (3-1, 1-1 SEC) still had a chance to take the lead with 1:30 left in the game, but Cam Little’s 42-yard field goal attempt from the left hashmark hit near the top of the right upright — and fluttered to the ground in the end zone no good. That drive came right after the Aggies had missed a longer field goal attempt.

Texas A&M (3-1, 1-0) has back-to-back wins over ranked teams since that embarrassing 17-14 home loss to Appalachian State two weeks ago. The conference opener for the Aggies came a week after a 17-9 win over then-No. 13 Miami, which then dropped 12 spots and now will be unranked after a 45-31 loss at home against Middle Tennessee State earlier Saturday.

"We’re by far not close to where we need. We have to fix some self-inflicted wounds, got to clean things up," Fisher said. "But we beat two good football teams not playing very well, not at the top of our game, but playing well at times and still competing and making plays when we had to, and it's very encouraging."

Arkansas led 14-0 after TD passes by Jefferson on consecutive drives in the first quarter. He first threw a screen that Ketron Jackson turned into a 32-yard score before finding Warren Thompson wide open behind the secondary for a 56-yarder.

But after the Razorbacks responded to Max Johnson’s 10-yard TD pass to Evan Stewart by driving 72 yards in 11 plays to the 3, Jefferson had the big turnover.

"That’s a tough one. Give A&M all the credit in the world, they fought back from 14 down," Razorbacks coach Sam Pittman said. "They had a couple of big plays ... and certainly a big fumble recovery."

Even though the Aggies failed to convert the tying extra point after the return, they did go ahead to stay on Achane’s 9-yard TD that capped the opening drive of the second half for a 20-14 lead.

Texas A&M: The Aggies recovered from their slow start offensively, when they went 3-and-out on their first four drives. They trailed 14-0 before getting their initial first down on a 63-yard run by Achane midway through the second quarter.

Arkansas: The Razorbacks missed a chance to have consecutive 4-0 starts for the first time since 1988-89, which was still a couple of seasons before joining the SEC. The Hogs haven't won their first two SEC games since 2006. They got to 4-0 overall last year with a win over the Aggies, who had won nine in a row in the series before that.

The Aggies will regain a few of the spots they've lost since being sixth in the preseason and through the first week, but they will still be quite a way from being back in the top 10. Arkansas will certainly slip.

The 12th series meeting at the home stadium of the NFL’s Dallas Cowboys was Texas A&M’s "home" game. The announced attendance was 63,580 — or almost 40,000 less than capacity at Kyle Field in College Station. That was higher than the crowd of 57,992 for last year’s Southwest Classic.

Arkansas is at home to play No. 2 Alabama next Saturday.

Texas A&M travels to Mississippi State next Saturday for the second of four consecutive games away from Kyle Field.