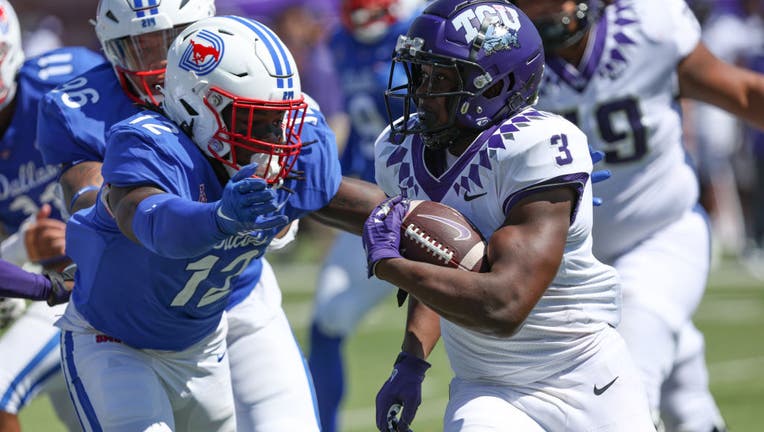 DALLAS (AP) - Max Duggan completed 22 of 29 passes for 278 yards and three touchdowns and Emari Demercado ran for two fourth-quarter touchdowns in TCU's 42-34 win over SMU on Saturday as coach Sonny Dykes' Frogs won the Iron Skillet rivalry game against the program that he coached the previous four seasons.

Dykes' return to the SMU campus, coaching a longtime backyard rival, led to a crowd of 35,569 -- the largest for a regular-season game in 23-year-old Ford Stadium and the school's first sellout since 2015.

Duggan threw 18 yards to Savion Williams in the first quarter, 8 yards to Jared Wiley in the second period and 80 yards on a shuffle-pass jet sweep to Derius Davis to give the Frogs (3-0) a 28-7 lead.

Demercado scored from 1-yard out on a drive that began at TCU's 37 following an interception by Josh Newton to put the Frogs ahead 35-21 midway through the fourth. With SMU within eight points in the closing minutes, Demercado burst through the middle and raced 63 yards for another score with 2:31 to play.

Tre Siggers rushed for three short touchdowns for SMU (2-2), including a 2-yarder with 5:14 left to get within 35-27 but a two-point pass failed. SMU quarterback Tanner Mordecai threw a 35-yard scoring pass to Jake Bailey with 1:04 left to cap the scoring.

TCU: Dykes is the first Frogs football coach to win his first three games since Francis Schmidt did it in 1929. The team's previous 3-0 start was in 2017, when Dykes was a TCU offensive analyst under Gary Patterson and the Frogs reached the Big 12 championship game.

SMU: The Mustangs' AAC opener will be next Saturday at UCF.