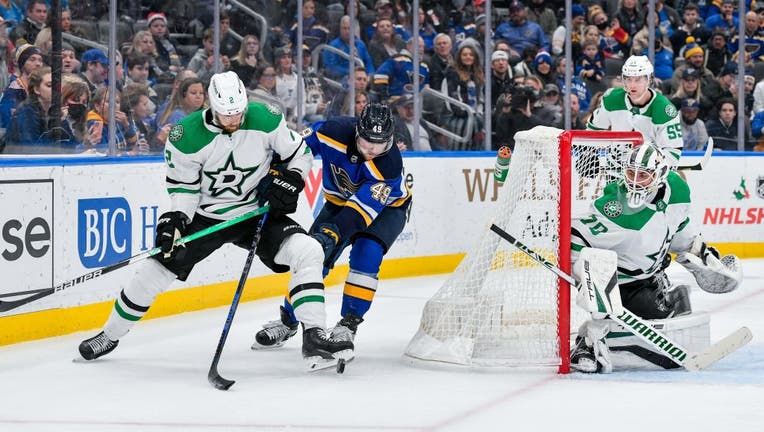 Lindgren improved to 5-0 since taking over in net for the injury-ravaged Blues and became the first goalie in franchise history to win his first five games.

"It’s been quite the ride so far," Lindgren said. "I think one thing I want to make sure there’s no complacency here, just obviously very thankful about another win tonight. Another excellent effort by the guys, and wake up tomorrow morning wanting more."

Logan Brown scored, Ivan Barbashev added an empty-netter and Pavel Buchnevich recorded two assists as St. Louis won for the fifth time in six games. The Blues have points in their last seven games (5-0-2) overall and in nine straight home games (8-0-1) since Nov. 18.

"Sometimes it’s to work and play a little bit more simple and ... when it’s time to create you can create, but mostly eliminating turnovers and just work, give us a lot of success as a team," Tarasenko said.

Jason Robertson scored and Braden Holtby made 30 saves for the Stars, who lost their fifth straight game. Dallas has scored three times in its last four games.

"Our ‘D’ are really tight on people right now and again, they’re physical, and they’re breaking plays up and there’s not as many pucks coming in our end, that’s one thing," Blues coach Craig Berube said. "And then secondly, I think that we’re just harder around our net. I think our forwards are doing a good job getting out on ‘D’ and not allowing shots to get through to the net."

The Stars went 0 for 3 on the power play and nearly gave up a short-handed tally as Buchnevich was awarded a penalty shot during Dallas’ third period man advantage. Buchnevich hit the post on a backhand attempt.

Brown broke the scoreless tie at the 3:35 mark of the second period, banking in the rebound of Colton Parayko’s slapshot between Holtby’s pads to give the Blues a 1-0 lead.

Tarasenko made it 2-0 with 10 seconds left in the second, finding a bouncing puck in the high slot and converting on a quick wrist shot.

Tarasenko continues to click with his linemates Buchnevich and Barbashev, fellow Russians.

"Just communicating where we’re going," Tarasenko said. "It’s nice when it comes with your native language."

Robertson’s goal, a rebound off John Klingberg’s shot with 7:49 left in the third, got the Stars back within one.

"Every night it should be fun to go out there and work your tail off and compete," Stars captain Jamie Benn said. "I’d say we’re too good of a team to be doing this again and have a losing streak like this."

"That was a big goal for sure," Berube said. "The power play was just huge at that time there. They had momentum, they scored, and they just had us hemmed in our zone for a little bit and it changed things."

Klingberg played in his 500th career game, while Barbashev suited up in his 300th.

Stars LW Roope Hintz and RW Alexander Radulov returned to the lineup after missing time due to an illness.

Blues: Travel to Winnipeg on Sunday.