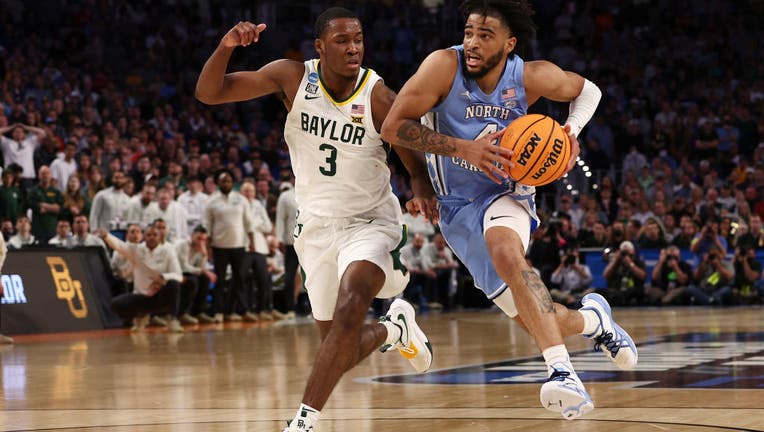 FORT WORTH, TEXAS - MARCH 19: R.J. Davis #4 of the North Carolina Tar Heels drives with the ball as Dale Bonner #3 of the Baylor Bears defends in the overtime period of the game during the second round of the 2022 NCAA Men's Basketball Tournament at

FORT WORTH, Texas (AP) - RJ Davis scored a career-high 30 points with a nifty layup while being fouled in overtime, and eighth-seeded North Carolina blew a 25-point second-half lead but still found a way to beat defending champion Baylor 93-86 in the second round of the NCAA Tournament on Saturday.

Brady Manek had a season-high 26 points before getting ejected because of a flagrant foul midway through the second half, right after his 3-pointer had given the Tar Heels (26-9) their largest lead.

A year after going out in the first round of the tourney in retiring coach Roy Williams' final game, Davis, Armando Bacot and these Tar Heels (26-9) are headed to Philadelphia and a Sweet 16 for first-year coach Hubert Davis.

Davis got his only points in overtime on the off-balance layup with 1:18 left and added the free throw for a 91-85 lead.

Adam Flagler had 27 points for Baylor (27-7), which made only one field goal in overtime. James Akinjo had 20 points while Jeremy Sochan had 15 points and 11 rebounds.

All-ACC power forward Armando Bacot had 15 points and 16 rebounds for North Carolina. After missing three of four free throws in the final 38 seconds of regulation, he made three of five in overtime.

The Tar Heels won as No. 8 seed over a top seed for third time. They did so on the way to the Final Four in 2000, 10 years after after beating top-seeded Oklahoma when Davis was a player for Dean Smith.

Baylor lost in the second round for the second time in the last three NCAA tourneys. The Bears, who fell to top-seeded Gonzaga in the round of 32 three years ago, were trying to match the biggest comeback ever in an NCAA Tournament game.

Manek, the graduate transfer from Oklahoma of the Big 12, was ejected with 10:08 left after his left elbow to the face of Sochan as they were battling underneath the Baylor basket. Manek had just drained a 3-pointer that put the Tar Heels ahead 67-42.

With Manek out, and Caleb Love fouling out soon after that, the Tar Heels had 10 turnovers as Baylor turned up the pressure and made a furious rally.

The Bears got within 76-73 on a three-point play with 1:48 left by Akinjo, who had another one with 16 seconds left to tie the game at 80-80. North Carolina had one more shot, but Davis' 3-point try hit off the front of the rim.

North Carolina will play either UCLA or Saint Mary's in the Sweet 16.