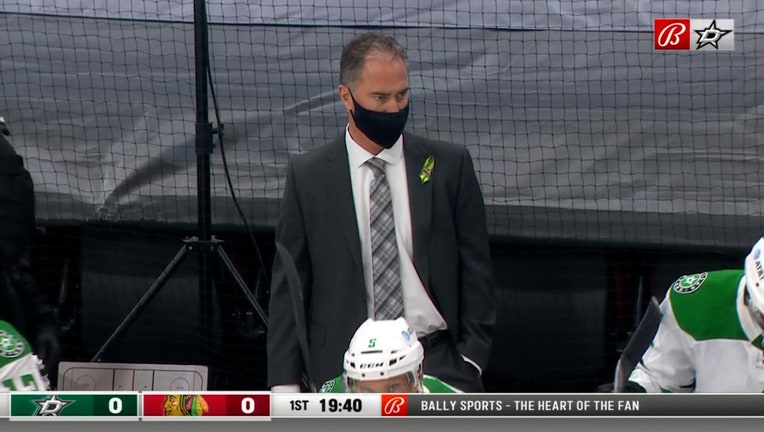 CHICAGO - Kirby Dach, Dominik Kubilik and Alex DeBrincat scored, Patrick Kane had a goal and an assist, and the Chicago Blackhawks beat the Dallas Stars 4-2 on Tuesday night.

The Stars rallied from a three-goal deficit in the third period, but goaltender Kevin Lankinen stopped Dallas’ Roope Hintz in the slot with 93 seconds to play after goals by Andrew Cogliano and Radek Faksa closed the gap.

"You knew they were going to have a push there in the third," Kane said. "It became a real hockey game. Gotta keep building off this."

The victory stopped Chicago’s two-game losing streak, and extended Dallas’ losing skid to two games, dropping them to sixth-place in the Central Division. The Blackhawks remain in fourth place.

"We responded well in a lot of different ways," Chicago coach Jeremy Colliton said of his team’s ability to hang on. "We were pretty solid defensively, faced adversity in the third. Now we want to take advantage of it."

Chicago’s Dach opened the scoring in the first period, about 11 minutes after his pass to set up an apparent goal by Kane was ruled offside. Dach accepted a pass from Kane and flipped a 15-foot wrist shot over goaltender Jake Oettinger’s glove side at 12:05.

"He’s got to get used to making plays in tight spaces, which he’s so good at," Colliton said. "If he can find that level consistently, it changes our team."

The Blackhawks made it 2-0 midway through the second period, Kubilik beating Oettinger from the left slot after collecting a cross-ice pass from Vinnie Hinostroza. The goal came about 40 seconds after Dallas’ Blake Comeau hit the post, the Stars’ best chance in the first 40 minutes.

"We’re just making the wrong play at the wrong time, and that’s exactly what they want," Cogliano said. "The first goal was a bonehead play by me. I shoot it into their player and they create a 2-on-1."

DeBrincat gave Chicago a 3-0 lead with a wrist shot from the slot with 54.5 seconds left in the second. He stole the clearing pass of Dallas defenseman Andrej Sekera in the left-wing corner and was unchallenged in skating into the slot to beat Oettinger over the right shoulder.

"We fell into a little bit of a trap," said Dallas assistant coach John Stevens, who ran the bench with head coach Rick Bowness in COVID protocol. "They go North-South and play a possession game. We made it far too easy on their top players."

Cogliano ended Lankinen’s shutout bid with a short-handed goal on a breakaway 1:29 into the third period. It ended a stretch of nearly 120 minutes without a goal by the Stars.

Faksa made it 3-2 with 6:14 to play, collecting defenseman Esa Lindell’s 60-foot shot off the boards and banking it over a diving Lankinen.

Kane added an empty-net goal for Chicago with seven seconds to play.

Oettinger made 24 saves, Lankinen had 25.

Dallas assistant coach John Stevens was in charge of the bench Tuesday night with head coach Rick Bowness still in Raleigh, North Carolina, awaiting NHL clearance after what the Stars termed a false positive for COVID-19 on Sunday morning.

Bowness, 66, was pulled from the bench after the second period of Sunday’s loss to Carolina after what general manager Jim Nill called a "low grade" positive test. Bowness was vaccinated earlier this year. He spoke with the team on a teleconference on Tuesday morning, but Stevens and the other assistants handled bench strategy against the Blackhawks.

The start of Dallas’ season was delayed after 17 players tested positive.

Forward Vinnie Hinostroza set up Dominik Kubalik’s second period goal in his return to Chicago. Hinostroza was reacquired from Florida on Friday for forward Brad Morrison. Hinostroza, who grew up in a Chicago suburb, is the 14th former Blackhawks reacquired by general manager Stan Bowman, and the 15th deal. Kris Versteeg was reacquired twice.

The Stars and Blackhawks meet again Thursday night in Chicago.