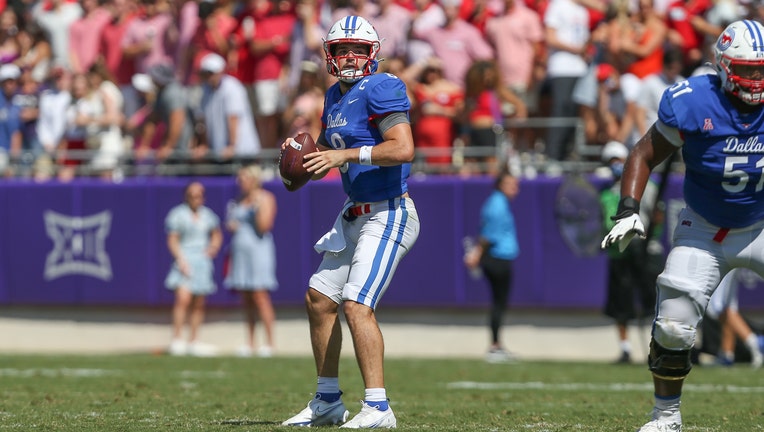 Southern Methodist Mustangs quarterback Tanner Mordecai (8) passes during the game between SMU and TCU on September 25, 2021 at Amon G. Carter Stadium in Fort Worth, TX. (Photo by George Walker/Icon Sportswire via Getty Images)

DALLAS - SMU's Tanner Mordecai is throwing touchdown passes at the fastest rate in the Football Bowl Subdivision since 2012.

The Oklahoma transfer has passed for at least four in each of the Mustangs' games, and his total of 24 is the most through five games since West Virginia's Geno Smith had the same number at this point nine years ago.

Mordecai is the fourth FBS quarterback since 2000 to have 24 TD passes at this point in a season.

The junior opened the season with seven TD passes against lower-tier Abilene Christian, then had four against North Texas, five against Louisiana Tech and four each against TCU and

Mordecai was a four-star recruit coming out of high school in Waco, Texas. He appeared in a total of 12 games for Oklahoma, backing up Jalen Hurts in 2019 and Spencer Rattler last year. He transf

erred to 24th-ranked SMU after 2020 starter Shane Buechele declared for the NFL draft, and he won the starter's job in August.