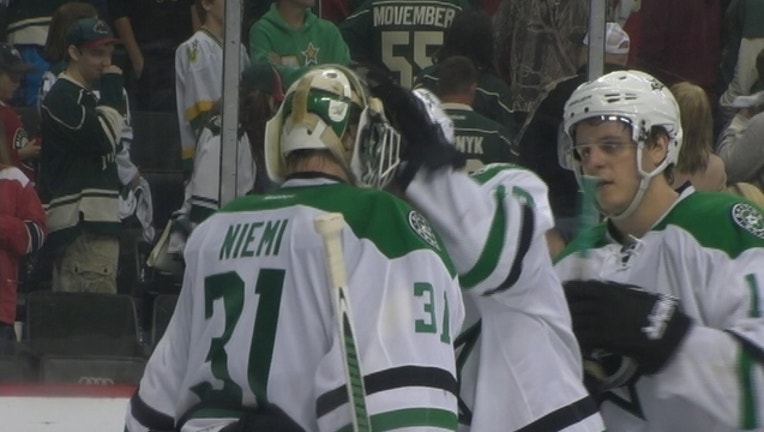 The Dallas Stars had their 4-0 lead sliced in half, and coach Lindy Ruff called his team over to try to stem the momentum with 15-plus minutes to play.

"Probably one of the most useless timeouts I've taken, because they couldn't hear a word I said anyway," Ruff said, "But I was just trying to tell them, 'Listen, we've got to play.' You've got to live that environment to get better at it."

Though the Wild pulled even closer, coming within a fraction of an inch of tying the game in the final minute, the Stars prevailed with a 5-4 victory on Sunday afternoon to wrap up their Western Conference quarterfinal series in six games and extract some valuable experience from the difficult finish.

Jason Spezza scored his fourth goal of the series and added three assists, and goalie Kari Lehtonen and the Stars needed every last one of them to reach the second round for the first time since 2008.

"A lot of things that you can take out of this that are good, a few things that are bad, but it's never easy to win a playoff series, especially against a tough team like Minnesota," said Patrick Sharp, who had one of the three first-period goals for Dallas.

John Klingberg, Jamie Benn and Alex Goligoski also scored for the Stars, who will face the winner of the Chicago-St. Louis series, which is tied at 3 entering their decisive Game 7 on Monday night.

"The veteran leaders are the guys that you need in a game like this to make a difference, and they get all the credit for leading the way for us," Ruff said.

Jared Spurgeon scored two of Minnesota's four third-period goals, both on the power play, and the Wild nearly tied the game with 34 seconds remaining when Nino Niederreiter crashed the crease for a loose puck.

Freeze-frame replays showed it in the net, but not fully across the goal line, as it connected with Lehtonen's right pad. The oh-so-close call was upheld by review.

"We knew they wouldn't go away. They didn't all series and we didn't expect them to now," Goligoski said. "They made some great plays, and we made a couple mistakes but found a way. Sometimes it's just about winning games, especially this time of year, so we're happy we (sneaked) away with it."

At the end of a sleepy second period, with the Wild and their fans seeming more than ready for summer vacation, Benn put the Stars in front 4-0 on his top-shelf shot. Benn had two assists and finished with 10 points in the series.

The Wild weren't ready to pack it in, though, as they proved during the torrid 20 minutes that followed.

In one of many odes throughout the afternoon to Minnesota's late musical prodigy Prince, the song "Let's Go Crazy" played on the sound system after each score by the Wild, who sent 16 shots at Lehtonen in the third period. Lehtonen finished with 25 saves and a 3-1 record in the series, but the Stars were all out of sorts down the stretch.

Those early goals added up, though, because the Stars only needed one more to seal it. They got a friendly bounce when Goligoski's shot bounced around the goal mouth and Dubnyk didn't see it beneath him. Charlie Coyle lunged to try to keep it out, but the puck glanced off Dubnyk and in for a 5-3 lead with 9:32 remaining.

"I guess that's why you throw pucks to the net, but that was a tough time to get a bounce like that," said Dubnyk, who stopped 19 shots. "The way the guys worked in the third period, I'm just proud to be back there and a part of that. Right to the end, we still managed to get within one and almost score there. That makes you feel sick to have to lose a game and a series on a bouncer like that."

Jason Pominville slammed in a rebound with 4:47 left, setting up the frantic final flurry, but the Stars held on.

"I feel like we should still be playing," Wild defenseman Ryan Suter said. "The way that third period ended, I thought, 'Man, just one more minute in that period and maybe we're going to keep going."