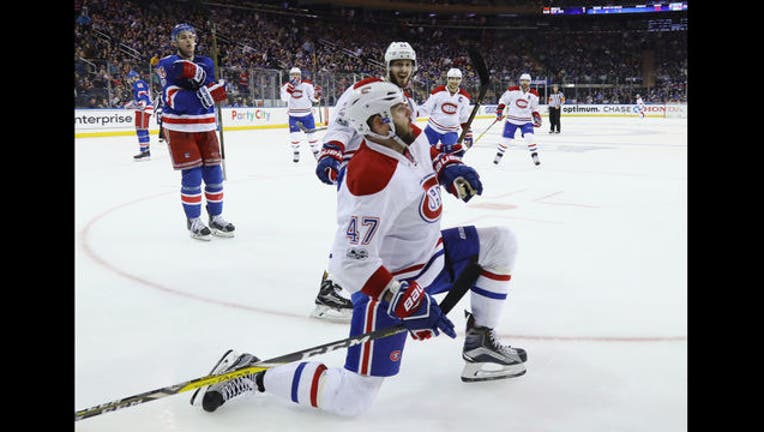 NEW YORK, NY - APRIL 16: Alexander Radulov #47 of the Montreal Canadiens celebrates his goal at 15:35 of the third period against the New York Rangers in Game Three of the Eastern Conference First Round. (Photo by Bruce Bennett/Getty Images)

DALLAS (AP) - The Dallas Stars signed right winger Alexander Radulov on Monday to a $31.25 million, five-year deal, the richest contract given to an unrestricted free agent this offseason.

The Stars obtained the top player available on the market on Day 3 of free agency. Radulov will count $6.25 million against the salary cap through 2021-22.

"Alexander is a dynamic playmaker with top-end speed and skill," General manager Jim Nill said. "To add a forward of this stature to our lineup makes our top six as deep and talented as any group in this league."

The 30-year-old Russian had 18 goals and 36 assists for 54 points last season with the Montreal Canadiens after returning to the NHL following four seasons in the Kontinental Hockey League. He played on a $5.75 million, one-year deal and was looking for a long-term agreement this time around.

Radulov got that from the Stars, who also signed center Martin Hanzal for $14.25 million over three years, acquired defenseman Marc Methot from Vegas and traded for and signed goaltender Ben Bishop.

Radulov said Montreal offered him a similar salary but not as many years as Dallas had until he already agreed to sign with the Stars.