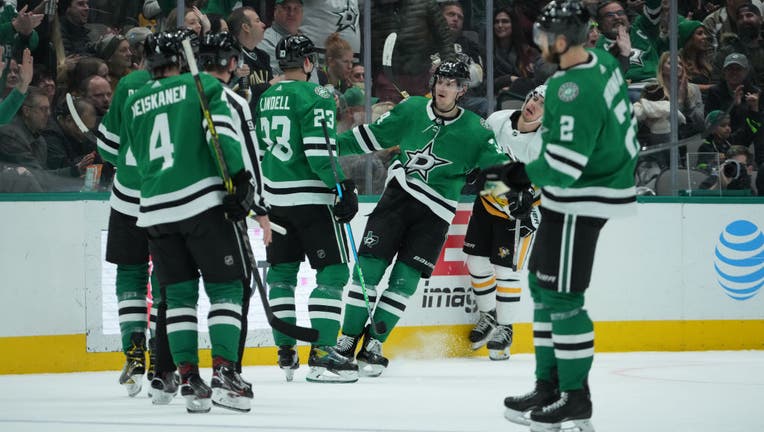 DALLAS, TX - JANUARY 8: Denis Gurianov #34 and the Dallas Stars celebrate a goal against the Pittsburgh Penguins at the American Airlines Center on January 8, 2022 in Dallas, Texas. (Photo by Glenn James/NHLI via Getty Images)

DALLAS (AP) - Roope Hintz and Joe Pavelski scored 75 seconds apart late in the third period, and the Dallas Stars stopped Pittsburgh's 10-game win streak with a 3-2 victory over the Penguins on Saturday.

Hintz scored on a backhander at 16:14 after Pavelski converted a rebound at 14:59, sending the Stars to their fourth straight win.

Brian Dumoulin and Kasperi Kapanen scored in a 25-second span early in the first period for the Penguins. Tristan Jarry made 29 saves.

Pittsburgh had the NHL's longest winning streak this season. It is 18-1-1 when leading after two periods.

Before the game, the Penguins added forwards Bryan Rust and Brock McGinn to their COVID-19 protocol list. Rust had seven goals and four assists in Pittsburgh's last three games after missing the previous 11 with a lower-body injury.

The Penguins played with 11 forwards, with Jeff Carter, who was recently cleared from the protocol, appearing in his first game since Dec. 19.

Gurianov finished an odd-man rush by sneaking a shot to Jarry's short side at 16:01 of the second period.

Pavelski tied it 14:59 into the third period, converting a rebound of Robertson's shot near the blue line.

It was Dallas' second game following a 17-day pause with 11 players on the COVID-19 list at some time during that stretch.

Penguins: Monday at Anaheim in the third game of a season-long six-game road trip.

Stars: Finishing a back-to-back at St. Louis on Sunday afternoon.