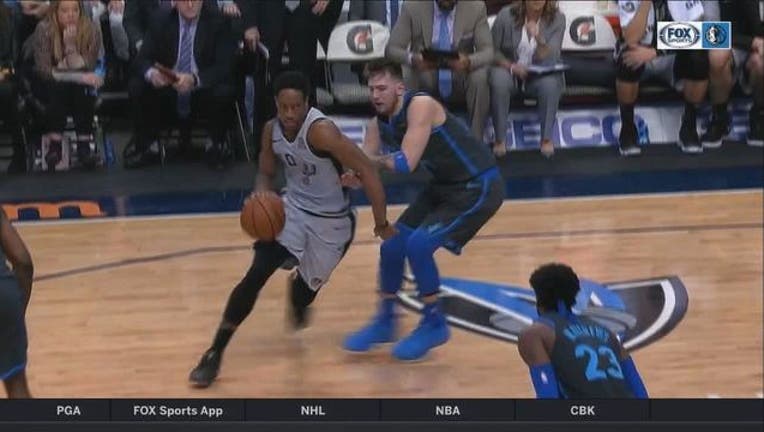 DALLAS (AP) -- Davis Bertans hit a go-ahead 3-pointer with 1:41 left, and the San Antonio Spurs rallied from a 19-point first-half deficit to beat the Dallas Mavericks 105-101 on Wednesday night.

The Spurs blew a six-point lead in the final period, but Bertans made his third 3-pointer of the quarter for a 99-96 lead and San Antonio led the rest of the way.

After Bertans' 3, LaMarcus Aldridge scored on a tip shot with 1:07 left to extend the lead to five. Wesley Matthews' 3 brought Dallas within two, but DeMar DeRozan hit a 20-footer at the other end and Belinelli sealed it with free throws.

Luka Doncic led Dallas with 25 points, adding eight rebounds and eight assists. He became the first rookie since Stephen Curry in 2010 to score 25 or more points in five straight games.

After trailing by 19 during the first half, San Antonio tied it at 80 on Belinelli's driving layup with 11:06 to play. DeRozan gave the Spurs their first lead 27 seconds later, setting up a three-minute stretch in which the lead changed hands seven times.

DeRozan hit back-to-back mid-range jumpers for a 94-90 lead, and he fed Aldridge for a dunk that extended the Spurs' advantage to six. Doncic answered with two baskets and an alley-oop pass to DeAndre Jordan that tied it.

Doncic's most impressive stretch came in the middle of the third quarter.

Trailing by double digits from the opening minutes of the game, the Spurs opened the second half on a 12-6 run to get within 62-57. Doncic then almost single-handedly kept Dallas in the lead for the rest of the quarter, scoring or assisting on the Mavs' next 12 points to help Dallas maintain a five-point lead going into the fourth.

Dallas has lost five of seven, and three of its last four at home after losing only three of its first 18 at American Airlines Center. The Mavericks are also 0-6 in games without J.J. Barea, who is out for the season after Achilles tendon surgery.

The Mavericks led 23-4 early and made seven 3-pointers in the first quarter. San Antonio closed within 56-45 at halftime by ending the half on a 17-9 run.

Mavericks guard Dennis Smith Jr. missed his fourth consecutive game amid trade rumors, this time with coach Rick Carlisle saying Smith was sick and away from the arena. Smith missed the previous three games with what was listed as back tightness.

Told of a Twitter exchange between Smith and a couple in a restaurant at lunch earlier in the day, Carlisle said, "I don't have any knowledge of that. My trainer told me he was sick and he's going to be out tonight. I've told you what I'm going to tell you about it."

Spurs: Rudy Gay returned to the starting lineup after missing the last five games with a sprained left wrist, scoring 14 points. Belinelli came back after missing one game with a left knee contusion.

Mavericks: The team sold out its 700th consecutive regular-season game, dating to Dec. 15, 2001. ... Matthews became the sixth player in Mavericks history to make 600 3-pointers when he drained one at 9:06 of the first quarter.

Spurs: At Minnesota on Friday.

Mavericks: At Indiana on Saturday.