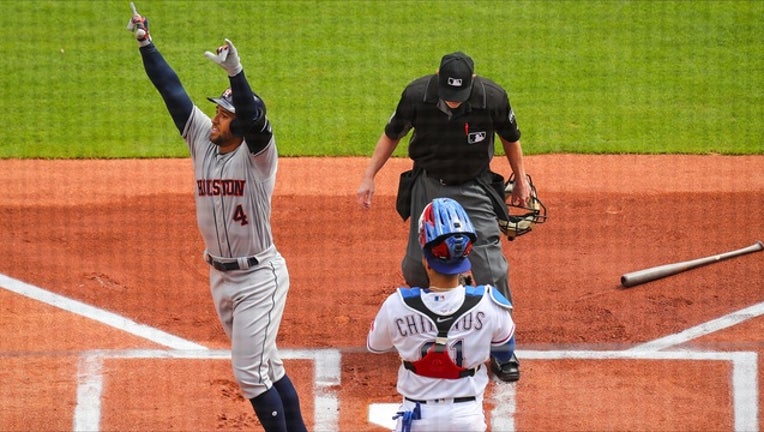 George Springer of the Astros celebrates after a home run in the first inning of the Opening Day baseball game against the Rangers at Globe Life Park in Arlington on March 29, 2018 in Arlington, Texas. (Photo by Richard Rodriguez/Getty Images)

ARLINGTON, Texas (AP) - George Springer got this season started for the Houston Astros the same way as last year, when they went on to become first-time World Series champions.

And this time, they had Justin Verlander for opening day.

Springer, the World Series MVP, hit a leadoff homer in the season opener for the second year in a row and Verlander, last season's late addition, pitched six scoreless innings in a 4-1 win over the Texas Rangers on Thursday.

"It's weird, it's cool," Springer said about his unique place in baseball history. "I'm happy to set the tone right there for our team."

Springer hit 34 homers during the regular season last year for the Astros, all from the leadoff spot. He hit six more in the postseason, including five in the World Series - going deep in each of the last four games against the Los Angeles Dodgers.

Now, according to the Elias Sports Bureau, the 28-year-old right fielder going in his fifth big league season is the only player with leadoff homers in consecutive openers. He hit a 2-0 pitch off lefty Cole Hamels (0-1) into the right-field seats.

"I went nuts in the dugout," said Josh Reddick, who before the game mentioned the 2017 leadoff homer to Springer. "Not only that, it was his 100th career homer, that's a big milestone. ... Very excited for him, very exciting for the team as well to get us off to a good start."

Jake Marisnick also homered for the Astros, in their 57th year as a franchise.

Verlander (1-0) struck out five, walked two and allowed only four singles. He is 6-0 with a 0.90 ERA in his six regular-season starts since his last-minute approval of a trade from the Detroit Tigers last Aug. 31 that made him eligible for the Astros' postseason roster. He was 5-0 last September, then won four more postseason games, and was the AL Championship Series MVP.

With Elvis Andrus and Adrian Beltre on base with two outs in the sixth, Verlander struck out young slugger Nomar Mazara with a 96mph fastball on his 90th and final pitch.

"He pitched opening day for a reason," manager A.J. Hinch said. "We're happy he's here for a longer period of time. ... His impact alone is going to be pretty special."

Hamels struck out seven and walked four in 5 2-3 innings. He allowed three runs on five hits.

"I thought Cole settled in," manager Jeff Banister said. "It seemed like he was battling the mound there a little early with the land leg, but was able to find some range there. He got behind Springer early, fastball out over the plate that Springer put a good swing on. But he was able to settle in and mix."

FOUR IN THE OUTFIELD

The Astros took the shift to an extreme against Texas left-handed slugger Joey Gallo, who hit 41 homers last season. Each time Gallo came to the plate, third baseman Alex Bregman moved out to left field, giving the Astros four outfielders while the remaining infielders all shifted to the right side. Bregman even recorded an out on a high popup to left.

"I actually didn't look back before the Gallo at-bat, I didn't know that we had a fourth outfielder," Verlander said.

Andrus led off the ninth against Ken Giles, the third Astros reliever, with a double. Andrus scored on a wild pitch and the Rangers avoided being shut out in a home opener for the first time since 1992.

Astros: 1B Yuli Gurriel is recovering from left hand surgery last month, but started the season on baseball's restricted list to serve his five-game suspension - for making an inappropriate gesture toward Dodgers pitcher Yu Darvish in the World Series - rather than on the disabled list. Hinch said the Astros will determine after the first five games if Gurriel is healthy enough to join the team.

AL MVP Jose Altuve, the league leader in hits each of the past four seasons, was 0 for 2. He was still part of two runs with a sacrifice fly in the third, and then walked and scored on a double by Carlos Correa in the eighth. ... Beltre started his 21st MLB season, the most by any active player, with two singles to increase his career hits total to 3,050, three shy of matching Rod Carew for 25th on the all-time list.

Astros lefty Dallas Keuchel (14-5 last season), the 2015 AL Cy Young Award winner, starts against Rangers newcomer Doug Fister (5-9 for Boston). Fister was the first of 166 major league free agents to finalize a big league contract, and first to switch teams, during the offseason. The right-hander was unsigned last season until May, and his first big MLB start was June 25 in Boston's 75th game.