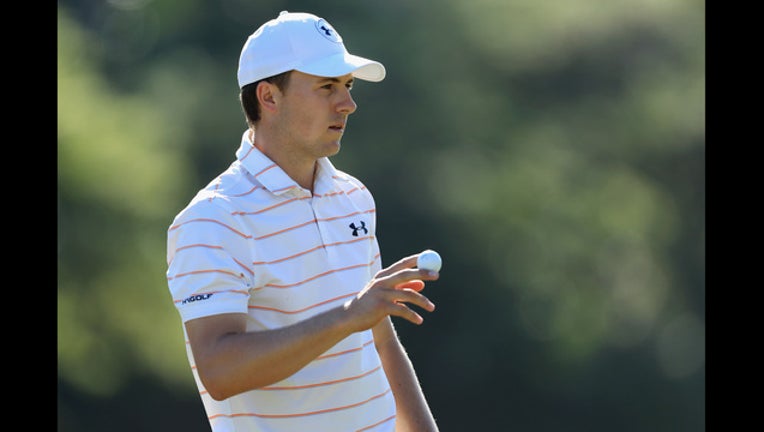 Jordan Spieth acknowledges the crowd on the tenth green during round two of the Sony Open In Hawaii at Waialae Country Club on January 12, 2018 in Honolulu, Hawaii. (Photo by Sam Greenwood/Getty Images)

One week after Harman shared the 36-hole lead at Kapalua, he ran off three straight birdies and closed with a 15-foot eagle putt for a 7-under 63 and a three-shot lead going into the weekend at the Sony Open.

Harman was at 13-under 127, and no one could catch him on Friday afternoon.

Chris Kirk, who shared the 18-hole lead with Harman, opened by pitching in from 25 yards for eagle on No. 10. He ended his day by driving into the canal on the easy par-5 ninth and making bogey for a 67.

Except for the tropical warmth, the two golf courses on the Hawaii swing are nothing alike. The Plantation Course at Kapalua was built on the side of the mountain on the west tip of Maui and features fairways that can stretch nearly 90 yards wide and big slopes in the greens.

Waialae is at sea level - waist-high hedges along the 16th and 17th holes and behind the 11th green are all that separate grass from the beach - with smaller, flatter greens and fairways framed by trees.

"The biggest elevation change here is from the walk down from the hotel," Harman said. "I've always kind of felt like as long as there's fairways and greens and holes to putt it, then I'm going to be fine."

The Georgia native is playing just as well on Oahu as he did on Maui.

He surged ahead in the morning with two quick birdies on the back nine, made the turn in 32 and ran off three straight birdies early on the front nine. After making his only bogey from a bunker on the par-3 seventh, Harman hit 7-iron from 172 yards to 15 feet on No. 9 for a closing eagle.

It's all just golf to him.

"I'm making putts, but I'm also putting myself in position to make those putts," he said. "I'm getting a bunch of looks. I'm not making everything I'm looking at, but I'm hitting a lot of good putts and made a few. I'm just going to show up tomorrow and try to hit the first tee shot best you can and go from there."

On another glorious day of sunshine and good scoring conditions, Johnson had a nine-hole stretch of eight pars and a bogey until a strong finish. He birdied the par-3 seventh and closed with an eagle to salvage a 67.

Defending champion Justin Thomas was closer to the cut line than the lead until he made a trio of 8-foot putts - two for birdies, one for eagle - to close out a 67. He was seven shots behind.

Jordan Spieth made the longest putt of his PGA Tour career - just over 90 feet on No. 5 - but didn't give himself many good looks. Spieth birdied the last hole for a 68 and was 10 shots behind.

"I didn't think I had enough club," Spieth said of his long putt. "I considered hitting a lob wedge because I had something like 30 yards to the hole into the breeze."

The putt looked good all the way, though it had some pace. There was some debate among his two playing partners, Xander Schauffele and Daniel Berger, along with caddie Michael Greller on what would have happened had the ball not slammed into the back of the cup.

Schauffele birdied his last four holes and was among those at 8-under 132, five shots behind.

Harman still looks back to a key tournament last year. He played the Zurich Classic, a two-man team event, with Johnson Wagner and used Wagner's Titleist golf ball during the alternate-shot portion. Harman put one in his bag the following week at the Wells Fargo Championship and won.

The change wasn't so much about distance as the way he was able to control the trajectory of the ball, especially in the wind.

"The wind doesn't seem to take it as much," he said. "That's just a personal thing for me. I feel like I did when I was a kid again. I felt like I was a better ball-striker when I was a kid. ... I'm starting to get some of those feelings back."

Harman played in the final group last week and tied for third, though no one was about to catch Dustin Johnson.

Peterson is playing on a medical extension because of hand surgery, and he has eight tournaments to make $375,165 (or earn 274 FedEx Cup points) to keep a full card the rest of the year. He doesn't sound overly worried, which is not to suggest he's overconfident.

He has a 3-month-old son, one reason he decided to take the entire fall off before resuming his bid to keep his card.