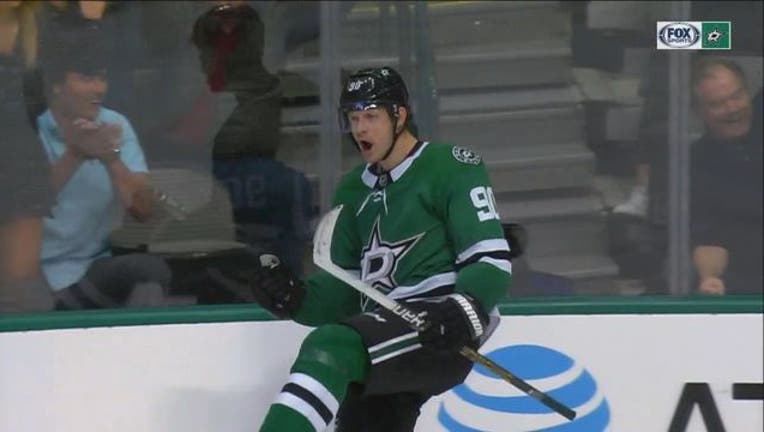 DALLAS (AP) - Jason Spezza and John Klingberg each had a goal and an assist, and the Dallas Stars snapped a three-game losing streak with a 4-2 victory over the Los Angeles Kings on Tuesday night.

Blake Comeau and Tyler Pitlick scored their first goals of the season. Eight Dallas players had at least one point; Devin Shore finished with two assists. Ben Bishop made 31 saves for Dallas, which never trailed.

Comeau scored for the Stars at 5:14 of the first period. Jason Dickinson skated behind the net from the left side for a possible wraparound, but couldn't control the puck and had to reach for it with his stick extended. The puck came off his stick to Comeau in the slot, and he beat Quick with a shot inside the left post. Spezza also received an assist on the goal.

The Kings outshot the Stars 9-8 in the first, but Dallas had better chances. Included were two more for Comeau. Quick stopped another shot from the slot barely five minutes before the period ended, and Comeau's shot from the left faceoff circle in the final minute soared into the netting above the glass.

Los Angeles failed to score on the period's only power play.

For Spezza's goal at 8:59 of the second, Justin Dowling carried the puck into the Kings' end and sent a wrist shot off Quick's right foot. The rebound went to Spezza, who scored over the goalie.

The Kings pulled within 2-1 when Kopitar slid a backhand under Bishop, but the one-goal difference last just 22 seconds before Klingberg scored on a wrist shot from the right point at 14:26.

Dallas held a 3-2 lead after Toffoli scored from inside the left circle at 17:09. Klingberg put the puck in the net at the end of the second, but after time expired.

Pitlick scored on a Stars power play at 4:23 of the third period, with assists going to Tyler Seguin and Klingberg.

With an extra skater, Los Angeles put the puck in the net with 30 seconds to play, but the goal was disallowed because of goaltender interference.

NOTES: Dallas RWs Alexander Radulov and Valeri Nichushkin (lower-body injuries) missed their third straight game. ... The Stars played with seven defensemen and just 11 forwards. . Entering the game, the Kings had been outscored 21-5 in their four straight losses, and opponents had a 10-2 advantage as Dallas lost three in a row. . Dowling was playing his first NHL game since 2016-17. He was recalled from Texas of the AHL on Monday. . Kings D Sean Walker assisted on Toffoli's goal in his NHL debut after being recalled from Ontario of the AHL. . Kopitar has 16 career goals in 59 games against the Stars.

Kings: At Minnesota on Thursday to finish a two-game trip.

Stars: Complete a three-game homestand on Thursday against Anaheim.