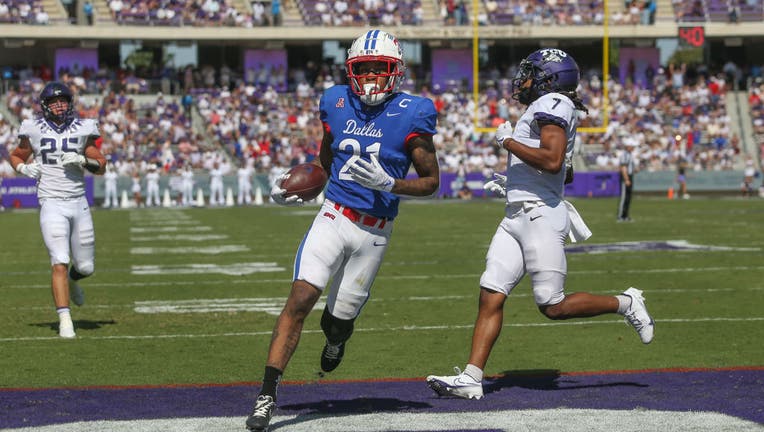 FORT WORTH, TX - SEPTEMBER 25: Southern Methodist Mustangs wide receiver Reggie Roberson Jr. (21) runs into the end zone for a touchdown during the game between SMU and TCU on September 25, 2021 at Amon G. Carter Stadium in Fort Worth, TX. (Photo by

FORT WORTH, Texas (AP) - Tanner Mordecai added to his nation-leading total in touchdown passes with four more and SMU overcame his three interceptions in a 42-34 victory over TCU on Saturday in the 100th meeting of the Dallas-Fort Worth rivals.

Ulysses Bentley IV ran for 153 yards and a touchdown and Danny Gray had 130 yards receiving, including a 68-yard catch-and-run for a score during a torrid start for both teams.

After last year's Iron Skillet game was called off because of COVID-19 issues in TCU's program, the Mustangs earned consecutive victories over the Horned Frogs for the first time since 1992-93.

The third pick by Mordecai was in the TCU end zone on a failed fourth-down try from the 3 on the final play of the first half, when coach Sonny Dykes went for the TD instead of a short field goal in a 21-21 game.

The Mustangs got the ball back in the exact same spot on the first play of the second half when Turner Coxe forced a fumble on a sack of Max Duggan and DeVere Levelston recovered. Bentley scored the tiebreaking TD from the 1 two plays later.

Duggan was 16 of 28 for 276 yards and three touchdowns, and Zach Evans had 113 yards rushing to surpass the century mark for the fourth time in the past five games, but it wasn't enough to extend a five-game TCU winning streak dating to last season.

The teams scored two touchdowns apiece within the first eight minutes, and Evans put the Horned Frogs up 21-14 with a career-long catch of 46 yards on a screen for a TD. Reggie Roberson scored for SMU less than three minutes later.

SMU: The Mustangs have three consecutive 4-0 starts under Dykes, and will try to make it three straight years of reaching 5-0 next week. That includes an 8-0 start in 2019. An impressive showing against a solid Power Five program gives Dykes more fodder for his belief that he's building a strong program.

TCU: The Horned Frogs have built their reputation on defense in 21 seasons under coach Gary Patterson. It's rare that they allow more than 400 yards to multiple non-conference opponents, but it's happened twice this year. SMU had 595 after California rolled up 442 two weeks ago.

TCU likely would have entered the Top 25 with a victory after being the first team out two of the past three weeks. Surprisingly, the Mustangs weren't receiving any votes despite another quick start under Dykes. That will change, but it will probably take SMU a few weeks to get into the poll.

TCU: Big 12 opener at home against Texas next Saturday.