DALLAS - Kendric Davis scored 22 points and Marcus Weathers added 20 as SMU rallied from a 15-point second half deficit to stun No. 6 Houston 85-83 on Wednesday night.

Edwards hit the first free throw but missed the second. Edwards banged his third shot off the front rim and Houston was called for a lane violation. SMU successfully inbounded the ball beneath its basket to run off the final 0.8 seconds, and much of the crowd in the lower bowl of Moody Coliseum stormed the court.

"That was one of the great efforts I’ve ever been a part of," SMU coach Tim Jankovich said.

"We’ve got a bullseye on our backs, and it’s not going to go away," Cougars coach Kelvin Sampson said. "But you know what? I’d rather have a bullseye on my back than not."

Houston entered play leading NCAA Division I in field goal defense, yielding opponents only 36% per game, and was third in scoring defense at 56.6 points allowed per game. SMU passed that scoring total with 11 minutes to play and shot 46.4%. The Mustangs made 12 of 23 3-pointers for 52%.

The Cougars led 51-40 at halftime after scoring the game’s first 11 points.

"They looked like an NBA team to me in the first 10 minutes," Jankovich said. 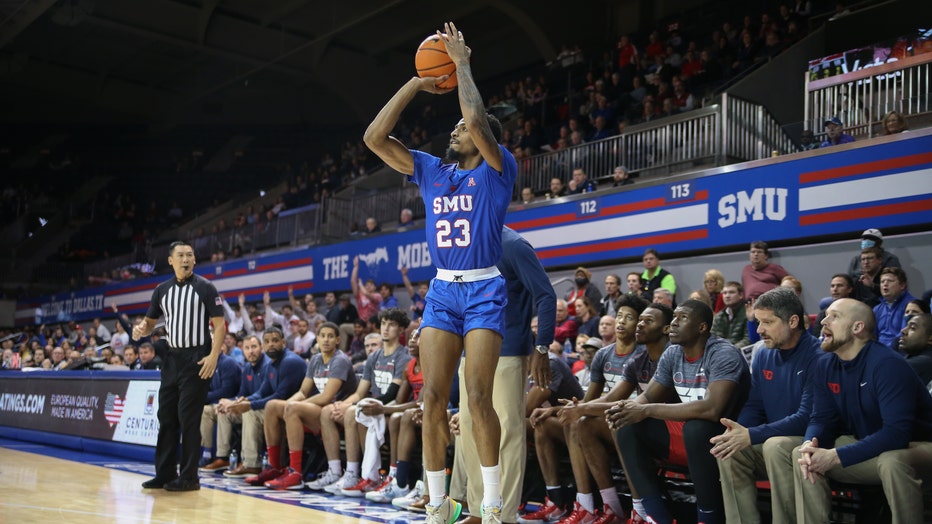 Houston: The Cougars can’t afford anymore missteps if they want to csontend for a possible No. 1 regional seed in the NCAA Tournament. Their losses this season have been by two points to Wisconsin in late November, one to Alabama in early December and two at SMU.

SMU: The Mustangs avoided their first losing streak since late November. They appear headed for a second consecutive NIT appearance with hopes of playing their way into the NCAA Tournament consideration.

HAVE A SEAT? NO THANKS

Two of the largest ovations – before the court storming – came during timeout recognitions of former President George W. Bush, who lives a short drive from Moody Coliseum, and Boban Marjanovic, the popular Dallas Mavericks reserve center.

HURRY ON BACK, YA HEAR?

The Cougars will return to North Texas in a few weeks for The American’s conference tournament, to be played at Dickies Arena in Fort Worth. That’s where Houston won last year’s event and beat Oklahoma State two months ago. The venue will be one of the eight sites for first- and second-round games in this year’s NCAA Tournament.

SMU: At East Carolina on Saturday.