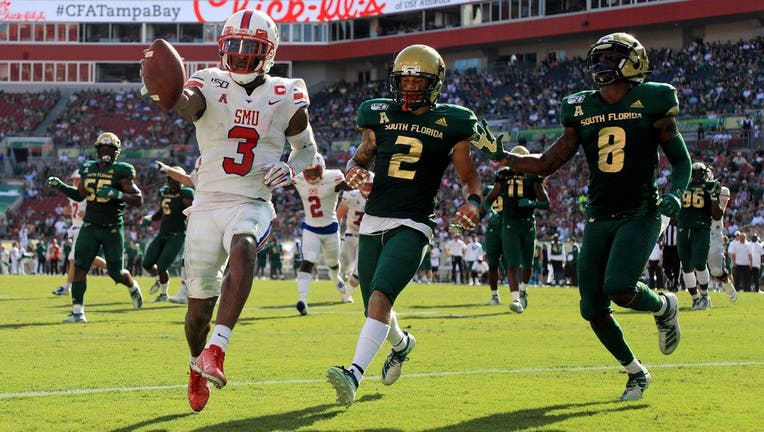 SMU is reveling in its first ranking in the Associated Press Top 25 since the death penalty as it prepares for its game on Saturday against Tulsa.

SMU is ranked No. 24 after throttling South Florida, 48-21, on Saturday. It’s the first time since 1983 the Mustangs have started the season 5-0. Notable wins so far this season include a defeat of rival and then-No. 25 TCU in the Battle for the Iron Skillet.

SMU's appearance in the rankings is historic, considering where that program has been. After returning getting the death penalty in 1987 and returning to play in 1989, the Mustangs managed one winning season (6-5 in 1997) over the next 20 years.

The program had an uptick under June Jones from 2009-12, going to four straight bowl games and topping out at eight victories. There has been only one winning season since. Under second-year coach Sonny Dykes, the Mustangs are playing their best ball since the Pony Express days of Eric Dickerson and Craig James in the early 1980s.

"Given our history, SMU's history, being a very successful program for a long time like it was in the `70s and `80s, and then obviously having the death penalty, it's just been a long climb  back," Dykes told the AP. "I think it probably means more to our fanbase and the SMU people than it does to others because it has been a long climb back. I think it gives our program some credibility."

SMU is not a national championship contender like it was back in its hey-day, but the Mustangs head into the second month of the season looking like a team that should push for an American Athletic Conference crown. An influx of transfers, including quarterback Shane Buechele from Texas and linebacker and leading tackler Richard McBryde from Auburn.

"When you have an influx of that many new people, it can mess your culture up a little bit," Dykes said. "That's what I worried about a little bit."

Things have clicked. The Mustangs are 3-0 on the road and 10-4 in their last 14 games overall.