Now that student athletes can make money off their names, images and likenesses, one SMU football player might earn some cash as an artist.

DALLAS - One SMU football player has an off-the-field skill that could prove valuable now that he can use it to make money.

When it comes to football, SMU safety Ra Kazadi goes hard. Off the field, he pours his soul into another life passion – painting.

"I think it’s kind of a reflection of myself," he said.

His art is valuable. His football identity at SMU is a platform that could help him self his work to a much bigger community.

Until this month, that was against the rules.

"I was able to do a lot of things but I couldn’t do it as a football player. I had to just have a bunch of different separate accounts so that we could like engage in that process of like commission," he said.

On July 1, the game changed at the state level.

Texas put into effect a new law allowing student athletes to profit off their name, image and likeness, commonly known as NIL. At the same time, the NCAA indefinitely lifted its NIL rules. 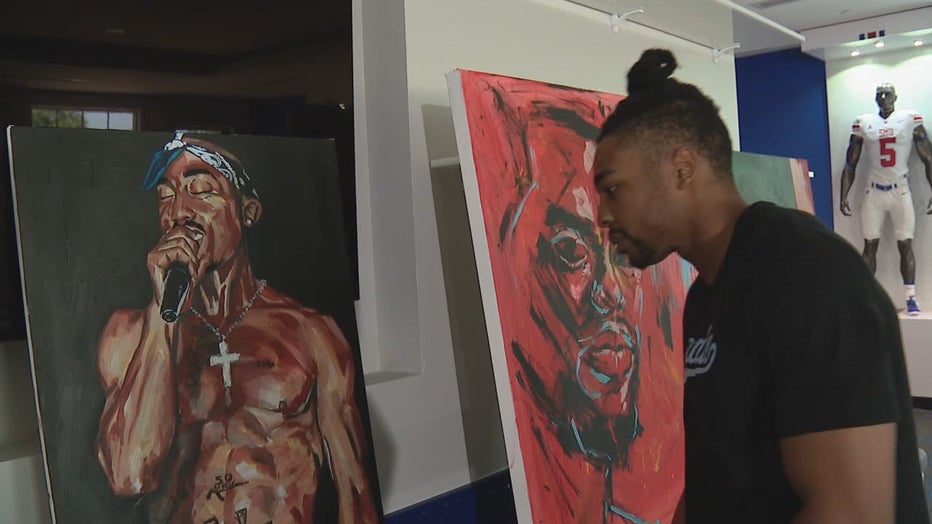 For Kazadi, the changes are already paying off.

"More commissions, more interest in my art and just a lot of fun," he said.

For years, the NCAA has promoted the message of going pro in something outside of sports. But their rules had always hamstrung athletes from really getting a jump start on that.

Now people like Kazadi can use their sports platform to work on their dreams outside of the game and before their athletic careers are over.

"I think it’s really cool for people to be able to prepare for later now. I think it gives a lot of guys the space to be more and especially people who haven’t had the idea of being even more than an athlete because they weren’t allowed to," he said.

"You’ll see student athletes who are backups on the volleyball team or swimmers or rowers, who will take advantage of this in ways that I think haven’t previously been contemplated," Conder said.

Too Kazadi, making art isn’t just about making the money. It’s his tool to communicate his feelings to the world.

"It’s really unique because it cuts through a lot of the noise," he said.

Lately, a lot of his work has spoken to the ongoing social justice dialogue. With the NIL rule change, he can now have that conversation with a much greater audience.

"That means a ton. Like being able to use the platform to the fullest because nobody’s gonna have it long. And be able to talk to people on an emotional level is usually how you come in contact with them and that like real change starts to happen. It happens up here before it happens out there. So, I think paintings allow you to do that," Kazadi said.

Profiting off of NIL is a big change but it falls short of another concept that’s been talked about for years – pay for play, a setup where schools would pay their student athletes.

Whether or not this NIL development is a steppingstone for that remains to be seen.

"The law is very clear that just being a college athlete does not make you an employee of the institution, which I think is what pay for play at its heart is really about," Conder said.