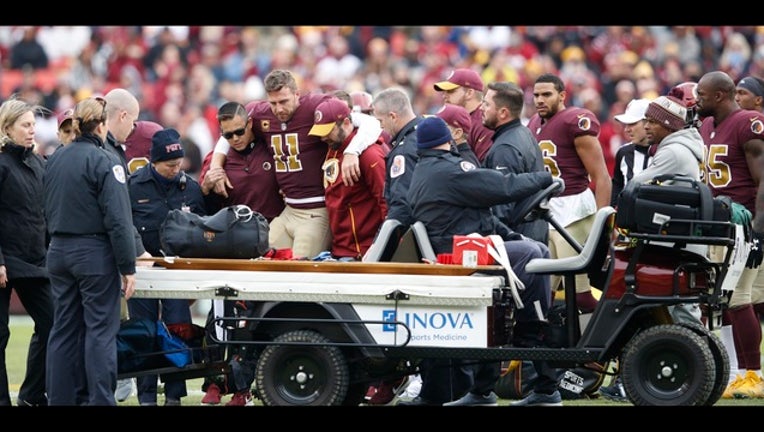 Alex Smith of the Redskins is helped off the field after being sacked and injured by Kareem Jackson of the Texans in the third quarter of the game at FedExField on November 18, 2018 in Landover, Maryland. (Photo by Joe Robbins/Getty Images)

LANDOVER, Md. (AP) - Justin Reid intercepted the ball in the end zone and saw nothing but green grass in front of him.

"I saw the daylight and I have to hit it," Reid said. "I wasn't going to let anyone stop me."

Reid's 101-yard interception return touchdown was the big play Houston needed to overcome a mistake-prone Deshaun Watson and beat the Washington Redskins 23-21 on Sunday, tying the franchise record with their seventh consecutive victory.

From a gruesome , season-ending injury to Redskins quarterback Alex Smith to three turnovers, it wasn't pretty, but the Texans (7-3) became the first team since the 1925 New York Giants to win seven in a row after starting 0-3.

"With this team, you never know where the play's going to come from," defensive end J.J. Watt said. "You never know who's going to make it - offense, defense, special teams - but you've got to find a way. For the seventh time, we found a way."

While Watson was 16 of 24 for 208 yards, a touchdown and two interceptions, Smith broke his right tibia and fibula on a sack by Kareem Jackson midway through the third quarter and will require surgery. Smith's right leg turned the wrong way in eerily similar fashion to Joe Theismann's broken leg on a Lawrence Taylor sack exactly 33 years ago to the day.

"I know it was very painful for him and heartbreaking for a lot of people," Redskins coach Jay Gruden said. "He's a great guy and hard worker and one of the key leaders on this football team. These things happen in pro football, unfortunately. Just hate to see them happen with a guy like Alex."

Colt McCoy replaced Smith and threw for a touchdown pass and led a long scoring drive for Washington (6-4), which likely will have to rely on the journeyman quarterback the rest of the way. When a McCoy-led drive finished with an Adrian Peterson touchdown to put the Redskins up 21-20 early in the fourth quarter, it was the first lead change in a game involving the Redskins all season.

Houston went ahead for good on a 54-yard field goal by Ka'imi Fairbairn, who missed a 44-yarder earlier. The winning streak stayed alive when Redskins kicker Dustin Hopkins missed a 63-yard field-goal attempt with 3 seconds left.

"We just have belief," Watson said. "Everyone keeps fighting. No one is doubting each other. Regardless, we try to play complementary football, but when the offense needs the defense to help us out, they do that and vice-versa."

Even though there were plenty of empty seats and a total attendance of 61,593 that was far below a sellout, Redskins cornerback Josh Norman called the crowd "electrifying." Norman last week criticized fans for not having players' backs at home and said the team plays better on the road.

"What an atmosphere, right?" Norman said. "You guys came out and you showed up in a big way. We can't be more proud and excited to be among you guys. ... I applaud you all, for sure."

PETERSON'S UP AND DOWN DAY

Peterson ran for two touchdowns to continue climbing the NFL rushing chart, but was bottled up on a lot of his other carries. Peterson's 3- and 7-yard TD runs gave him 105 in his career and moved him past former Redskins star John Riggins into sole possession of sixth all time, one behind Jim Brown for fifth.

Peterson finished with 51 yards on 16 carries.

In his second game with the Texans, Demaryius Thomas was a non-factor. Watson only threw his way twice - once on a play wiped out by a penalty - and the former Broncos receiver did not have a catch.

Thomas stayed in Houston during the bye week in Houston to study the playbook and watch film after making a handful of newcomer mistakes in his debut. Thomas had three catches for 61 yards in that game, but disappeared from the offense Sunday.

Washington receiver Trey Quinn made a major impact in his return after missing more than two months with a high-ankle sprain. Quinn, who was "Mr. Irrelevant" caught four passes for 49 yards starting in place of injured wideout Jamison Crowder and would have been the emergency QB had McCoy gone down.