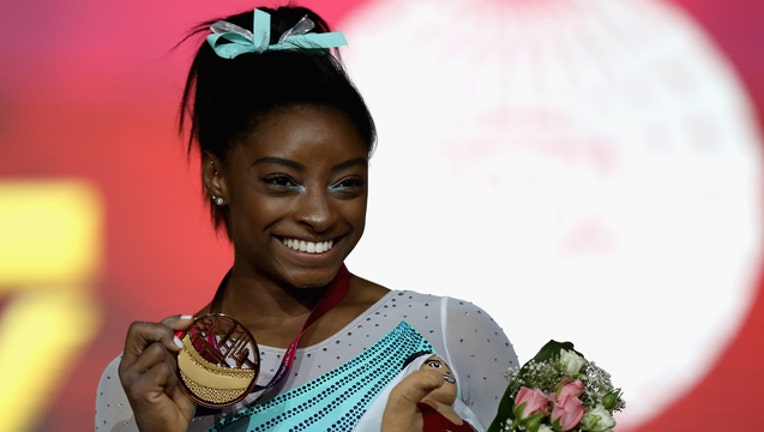 Simone Biles poses for a photograph with her gold medal after winning the Women's All-Round Final during day eight of 2018 FIG Artistic Gymnastics Championships at Aspire Dome on November 1, 2018 in Doha, Qatar. (Photo by Francois Nel/Getty Images)

DOHA, Qatar (AP) — Simone Biles attempted to smile but her eyes betrayed her. She was angry, paying little attention to the gold medal around her neck, the one that made history.

Yes, winning never gets old. It's just not why she does this.

The challenge whenever the greatest gymnast of her and any other generation steps onto the floor isn't to impress the judges so much as to meet her own impossibly high standards. The one that keeps nudging the 21-year-old to propel herself and her sport forward.

And for two hours Thursday, for the first time in a long time, the momentum slowed. At least in the eyes of Biles, who didn't exactly sound like someone who had just become the first woman to win four world all-around championships, a feat she pulled off despite a handful of uncharacteristic errors to beat Japan's Mai Murakami and American teammate Morgan Hurd by more than 1.6 points.

It's a sizable margin for nearly everyone else, but not for Biles. Battling a kidney stone that she insists is manageable, she sat down her vault in the first rotation, came off the beam on her third and stepped out of bounds on floor exercise.

"It's not the gymnast that I am, to go out there and kind of bomb a meet like this," said Biles after posting an all-around score of 57.491. "Even though I won, I wish it were a little bit different."

Only it wasn't, a testament to the massive difficulty Biles packs into each event. What she's doing on floor exercise is as hard as anything the men can come up with. The vault — the one that will carry her name when code of points is updated — is so tough no other woman even attempts it in competition.

Doing anything else would be "boring" as her coach Laurent Landi put it. Yet Biles doesn't use the remarkably high start values of her routines as an excuse when she doesn't hit them. There is no grading on a curve, at least not in her head.

Biles jokingly asked Landi if she needed an 18 — a score not currently possible in gymnastics — heading into her floor exercise to catch Murakami. The deficit was actually 13.308 points, totally doable. Biles briefly thought about toning down her boundary pushing set for something a bit easier just to make sure she won. The internal wavering was fleeting.

"I would never," Biles said.

Playing it safe simply isn't her style. While her right foot did slip into the red out of bounds during her first tumbling pass, it hardly mattered. Her score of 15.000 was more than enough to rocket past Murakami and Hurd, the 2017 world champion.

"It's absolutely insane that she fell twice and won," Hurd said. "I have no words."

Neither did Biles, at least not any positive ones.

Most meets with Biles typically start the same. She drills the vault — where she is the reigning Olympic champion — and then spends the next three rotations simply padding her lead to margins that look like typos.

Not this time. Attempting "the Biles" — a roundoff, half-twist onto the table, front double full off typically done by men — her left arm barely touched the table, causing her to under-rotate. She landed and promptly sat down, her score of 14.533 placing her in third.

Known for getting angry with herself after mistakes, she responded with her significantly improved uneven bars set and executed her double-twisting double-somersault dismount to move slightly in front of Hurd halfway through.

Then things got weird.

Biles came off the beam early, hopped back up then grabbed the 4-inch piece of wood moments later when she had trouble landing a front flip, a sequence she struggled with during qualifying. It was a stunning sequence, not just to Biles but to the group that has been chasing her for the better part of decade.

Given what looked like an opening, Murakami — the first Japanese woman to win a world all-around medal in nine years — kept it real.

"Instead of expecting I can win, I felt like, 'oh, Biles can fall,'" Murakami said.

Hurd had a chance to catch her good friend but wobbled twice during her own beam set, leaving the 17-year-old in a "rage" as she headed to floor while also leaving Biles in the lead, where she is the Olympic champion.

While Hurd put together what U.S. high performance coordinator Tom Forster called "the best routine I've ever seen her do" it wasn't quite enough to slide past Murakami.

Still, Biles stepped onto the floor facing external pressure for the first time in a long time. She came through but her emotions on the medal stand tilted more toward disappointment than joy.

"It just sucks that I did so bad and I still won," said Biles, who plans to compete in all four event finals. "I wish it could not happen. You have to earn it, and I'm not sure I earned it tonight."

That's not exactly true. Her routines are so much more challenging than the rest of the world's she can afford a slip up here or there. And while she could simply employ the same skills as everyone else and probably win on execution scores alone, that wouldn't be any fun.

"She has (such) great ability that she needs to push it to the limit," Landi said. "And when it goes very well, it's amazing. When it doesn't go well, it's still good enough."

Even on days she thinks it isn't.