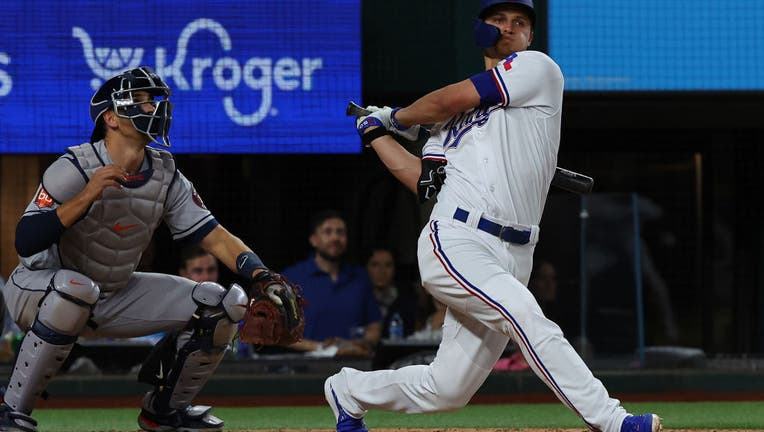 ARLINGTON, TEXAS - APRIL 25: Corey Seager #5 of the Texas Rangers hits an RBI single in the seventh inning against the Houston Astros at Globe Life Field on April 25, 2022 in Arlington, Texas. (Photo by Richard Rodriguez/Getty Images)

ARLINGTON, Texas - Corey Seager feels like things are starting to come together for the Texas Rangers, who have won four of their last five games.

"Everything’s kind of clicking on both sides, the chemistry is getting better," Seager said. "There’s a lot of new faces, and a lot of new parts that we’re coming together ... and are starting to figure themselves out."

Along with the timely hitting late, Matt Moore (1-0) and three other relievers combined for 3 1/3 scoreless innings. Young right-handed starter Dane Dunning struck out five and allowed two runs in 5 2/3 innings.

Pinch-hitter Willie Calhoun opened the Texas seventh with a double off just-in reliever Phil Maton (0-1), who after getting his only out allowed Semien's single through the left side of the drawn-in infield that tied the game at 2-2. After a single by Garcia, another pitching change and a wild pitch,

"For Willie to come off the bench right there, it’s not an easy thing to do," Texas manager Chris Woodward said. "A huge hit there to start that inning, and we end up getting the lead. And Semien had a really good at-bat before Adolis. Those are the hits we’re going to need."

Garcia hit his bases-loaded double with two outs in the eighth for the Rangers, who were 2-9 before their recent surge. They won for only the second time in their seven home games this season.

Yordan Alvarez hit his fourth homer for the Astros, who have lost five of six. Kyle Tucker drove in a run with a two-out single in the sixth on which he initially slammed his bat to the ground in disgust thinking he had popped out to shallow left.

"He did pitch good. He got out of some tough jams, made some pitches when he had to," Astros manager Dusty Baker said. "He got up close to 100 pitches, what we hoped for, and he hoped for too."

Valdez seemed OK after Nathaniel Lowe’s bat shattered in the fourth and helicoptered into the pitcher’s upper back. That happened when Lowe, who had two hits to raise his batting average to .381, grounded into an inning-ending double play.

"We knew it hit him, but we didn’t know where, but he said it hit him in the muscle and he said it didn't hurt. ... he's going to be sore tomorrow," said Baker, who called the play scary. "I’ve seen that stick in a couple of guys."

Texas pitchers have allowed two or fewer runs in four consecutive games, the team's longest such stretch since April 2017.

"It really is an execution thing, but I think to execute, there’s just a little bit more of a calmness to them," Woodward said of the pitchers. "They’re uber-competitive bunch, but I just think that they’re on their feet, are on solid ground a little bit more. ... Not as much anxiousness."

The Rangers scored four runs in the top of the first inning of their season opener April 8 at Toronto. In their 15 games since, they have been scoreless in their first innings while hitting .167 (9 for 54). .... The retractable roof at Globe Life Field was open for the sixth time in the Rangers’ seven home games this season. The roof was open for only 11 of the team’s 81 home games last season.

Astros: Alvarez fouled a pitch off his right shin while batting in the third inning. He immediately jumped away from the plate in pain and dropped to both knees with his head bowed toward the ground. He eventually got up and stayed in the game, then hit an inning-ending comebacker to Dunning.

Rangers: Woodward said RHP Spencer Patton's right oblique issue isn't thought to be serious even though the right-hander was put on the 10-day injured list Sunday. Woodward said before Monday's game that Patton had been pitching through some soreness.

Jake Odorizzi (0-2, 9.00 ERA), who didn't make it out of the first inning in his last start, is scheduled to take the mound for the Astros. Rangers lefty-hander Taylor Hearn (0-1, 7.59) is 2-0 in seven career appearances against Houston, the only team he has multiple victories against.