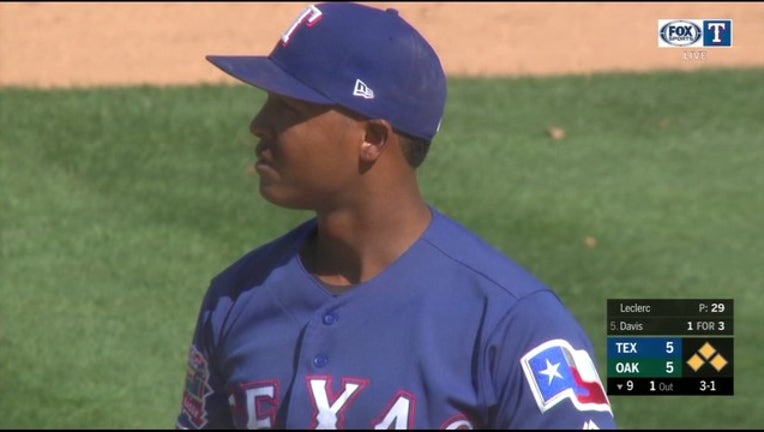 Marcus Semien homered and scored the game-winning run on Davis' bases-loaded walk in the bottom of the ninth inning as the Oakland Athletics beat the Texas Rangers 6-5 on Sunday.

"Just get the job done, don't try to get too big and hit a home run," Davis said he told himself when he stepped to the plate.

Texas led 5-4 in the ninth with José Leclerc (1-3) pitching for a third straight day, seeking his sixth save. His blown save was his third.

Leclerc walked Davis with one out after Matt Olson singled in Chris Hermann with the tying run.

Hermann singled leading off the ninth and Semien followed with a walk.

Leclerc threw 31 pitches and 15 were fouled off.

"It's unfair to put him in that role three days in a row and four out of five," Woodward said. "It hurts my heart to see him take the loss."

Danny Santana was 3 for 4 with a homer and a double for Texas. Nomar Mazara also went deep for the Rangers, winless in eight straight series. They are 0-6-2 since sweeping Detroit from June 25-27.

Santana was 8 for 19 in the series with two homers, two doubles, a triple and nine RBIs. His eight hits matched the most by a Rangers player in any series this season.

Texas rallied from a 4-2 deficit in the eighth when Willie Calhoun's RBI double off closer Liam Hendriks highlighted a three-run inning.

Melvin summoned Hendriks looking for a five-out save after Shin-Soo Choo singled and Santana doubled to start the eighth against Joakim Soria.

Blake Treinen (4-3) worked a scoreless ninth for the win.

Oakland starter Mike Fiers, seeking his eighth straight win, gave up two runs in six innings of four-hit ball. He struck out six and walked four. The 34-year-old right-hander is unbeaten over his last 15 starts with a 2.30 ERA in 97 2/3 innings during that stretch.

Semien homered off Payano leading off the fourth. His 17th of the season broke a scoreless tie.

Santana hit his 15th home run leading off the sixth against Fiers, and Mazara connected on his 15th two batters later.

The Rangers pushed back left-hander Mike Minor's next scheduled start from Tuesday to Wednesday. Minor has been the subject of trade speculation in recent weeks, and the move bumps his upcoming outing until after Wednesday's deadline, avoiding the possibility of issues with interested teams, Woodward said.

Texas right-hander Edinson Vólquez, on the injured list with an elbow strain since April 5, told reporters Saturday he wants to pitch again this year but plans to retire at the end of the season. ... Right-hander Kyle Dowdy, a Rule 5 selection claimed by the Rangers during spring training, cleared waivers and was accepted back by the Cleveland Indians after Texas designated him for assignment on Thursday.

Rangers: Santana exited in the ninth inning with calf stiffness.

Athletics: C Josh Phegley left in the fifth with a bruised left thumb. ... X-rays were negative. ... OF Stephen Piscotty (sprained right knee) had six at-bats as the DH in his first game on a rehab assignment with Triple-A Las Vegas on Saturday. He was scheduled to play seven innings in the field on Sunday, Melvin said.