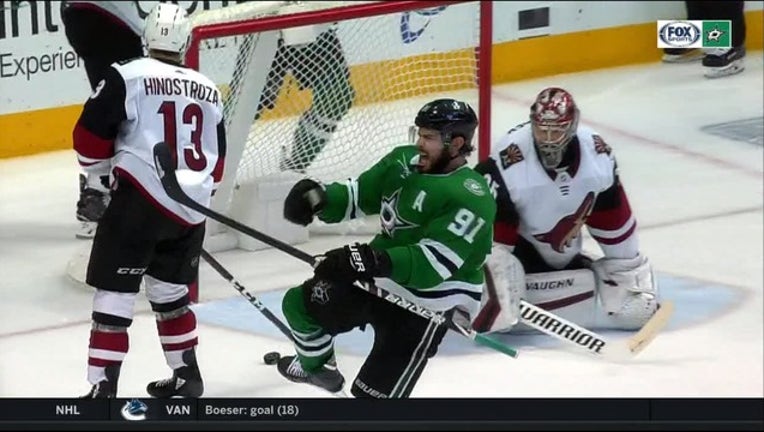 DALLAS (AP) - Tyler Seguin scored a tiebreaking goal with 7:32 to play, and the Dallas Stars scored four goals in a wild third period on the way to a 5-4 victory over the Arizona Coyotes on Monday night.

Trailing 2-1 after two periods, Dallas scored three times in 71-second span of the third to take a 4-2 lead. The Coyotes rallied with two goals in a 61-second span to tie it at 4-4.

Seguin scored his fifth game-winning goal of the season by taking a pass from Jamie Benn from behind the net and sending a wrist shot from the slot past Kuemper and inside the left post.

The game broke open after the Stars' Brett Ritchie drew a major penalty for boarding the Coyotes' Alex Goligoski and a game misconduct late in the second period.

Arizona couldn't score on the lengthy power play, in part because two Coyotes went to the penalty box during that time in the third period.

Klingberg and Faksa scored Dallas' second and third power-play goals of the game for a 3-2 lead at 3:04. Janmark added the fourth goal with a shot from the slot at 3:39.

The Stars killed a penalty, but back at even strength allowed goals by Hinostroza at 6:49 and Galchenyuk at 7:50 that tied it.

Arizona took one-goal leads with Ekman-Larsson scoring in the first period and Connauton in the second.

In between, Hintz scored a power-play goal at 3:36 of the second.

The teams were skating 4-on-4 when Ekman-Larsson scored 8:49 into the game. He took a cross-ice pass from Nick Cousins in the left faceoff circle and sent a wrist shot past Bishop.

Dallas' goalie stopped a 3-on-1 rush with 15 seconds left in the first period, which ended with Arizona leading 1-0.

The Stars tied the game on the power play at 3:36 of the second period. Jason Spezza passed from the right faceoff circle to the slot, and Hintz redirected the puck past Kuemper.

Arizona regained the lead at 9:54 of the second, when Connauton drilled a wrist shot inside the left post from the top of the left circle.

NOTES: Goligoski was helped off the ice following Ritchie's penalties, and did not return. . Coyotes D Jakob Chychrun (lower-body injury) missed his second straight game. He did not travel with the team. ... Dallas C Jason Dickinson (lower body) returned after missing two games. . Connauton's goal was his first in 38 games, since April 3, 2018. . Hintz hadn't scored in 20 NHL games, since his goal at Pittsburgh on Nov. 21. . Each starting goalie came in hot. Kuemper had provided points in nine straight games (6-0-3), allowing only 20 goals. Bishop had allowed only three goals and had won three in a row.

Coyotes: Complete a six-game trip on Tuesday at Nashville.

Stars: Play the first of five games in a row on the road, and their second in six days at Nashville on Thursday.