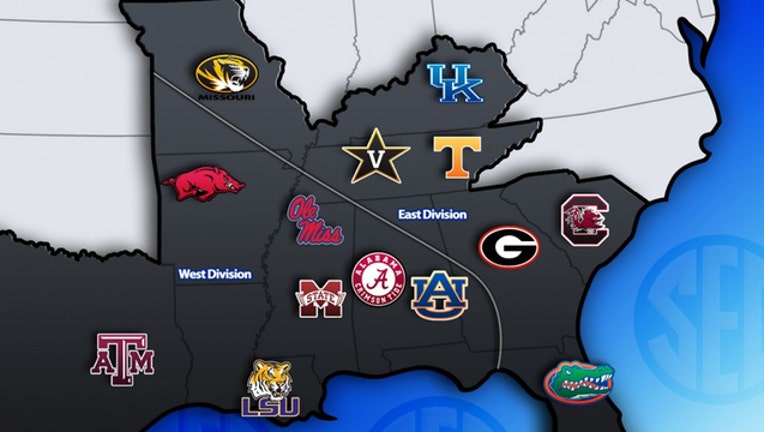 The Southeastern Conference is the unquestioned king of college football leagues.

Maybe in some circles.

That mindset has become practically a mantra for SEC coaches, fans and media over the last decade, but other leagues have won the national crown the last two seasons.

As usual, this season the SEC has no shortage of solid candidates to crack the four-team College Football Playoffs, including Alabama despite an unsettled quarterback situation. That's a familiar refrain for other would-be contenders like Georgia, Mississippi, LSU and perhaps even Auburn, which doesn't expect to miss a beat with Jeremy Johnson replacing Nick Marshall.

It's still hard to argue against the top-to-bottom strength of a league where Mississippi State is picked to finish last in the SEC West a year after spending five weeks ranked No. 1 in the land. And the Bulldogs' Dak Prescott is the league's only established star quarterback.

"I feel like we weren't satisfied with the No. 1 ranking because we wanted to be No. 1 at the end of the year," Mississippi State defensive back Taveze Calhoun said.

That basically sums up the ambitions of the league's top powers since Ohio State pounded away at Alabama's defense in the Sugar Bowl, a semifinal game.

But the SEC has its work cut out.

The league didn't even lead the way into the NFL draft either with the ACC and Pac-12 having more first-rounders if fewer overall picks.

If the case for No. 1 league isn't quite so open and shut these days, there's little question the SEC West stacks up as the most compelling, cannibalistic division. All seven programs are led by coaches making at least $4 million a year.

The league media picked Auburn to win the SEC but Alabama got more points in the West voting, illustrating the lack of a consensus favorite even within that state.

Some things to watch in the SEC this season:

UNPROVEN QUARTERBACKS: More than half of the teams still had open competition going into training camps, with two more graduate transfers joining the mix. Former Virginia starter Greyson Lambert is competing at Georgia and ex-Clemson quarterback Chad Kelly is battling for the starting job at Mississippi. South Carolina receiver Pharoh Cooper completed more passes (five) last season than any QB on the Gamecocks' roster. Auburn's Jeremy Johnson and Tennessee's Josh Dobbs could be rising stars, while Prescott and Arkansas' Brandon Allen have the most experience.

RUNNERS GALORE: The league's backfields still pack plenty of starpower despite the loss of Georgia's Todd Gurley, Alabama's T.J. Yeldon and Auburn's Cameron Artis-Payne. The Bulldogs return Nick Chubb, who had a huge freshman season. The Tide bring back 240-pound back Derrick Henry. Arkansas has 1,000-yard rushers Jonathan Williams and Alex Collins, and Leonard Fournette returns at LSU after starring as a freshman.

NEW COORDINATORS: There are 14 of them around the league, counting Vanderbilt coach Derrick Mason, who's added running the defense to his duties. Auburn hired Will Muschamp as defensive coordinator and Texas A&M lured John Chavis from LSU trying to get those defenses up to speed with the offenses. Both are raking in at least $5 million over three years.

ROAD TESTS: There are no easy roads to Atlanta or the College Football Playoffs in the SEC, especially in the loaded Western Division. Some paths are harder than others. 'Bama not only opens in a neutral-site game with Wisconsin but visits East Division favorite Georgia, Texas A&M, Mississippi State and Auburn. Maybe Arkansas is poised for a breakthrough season but the Razorbacks have only three SEC home games and face Texas A&M in Arlington, Texas. The Razorbacks also visit Alabama, Ole Miss, LSU and Tennessee.

AGING ICONS: You never know when a coach will decide to call it quits, and that includes South Carolina's 70-year-old Steve Spurrier and Alabama's Nick Saban, who turns 64 on Oct. 31. That time might be years away since both appear to still be going strong. Spurrier draws plenty of attention for his workout regimen and Saban still rounds up his assistants for hoops games. Missouri's Gary Pinkel, who has won two straight SEC East titles, is 63. LSU's Les Miles turns 62 in November.