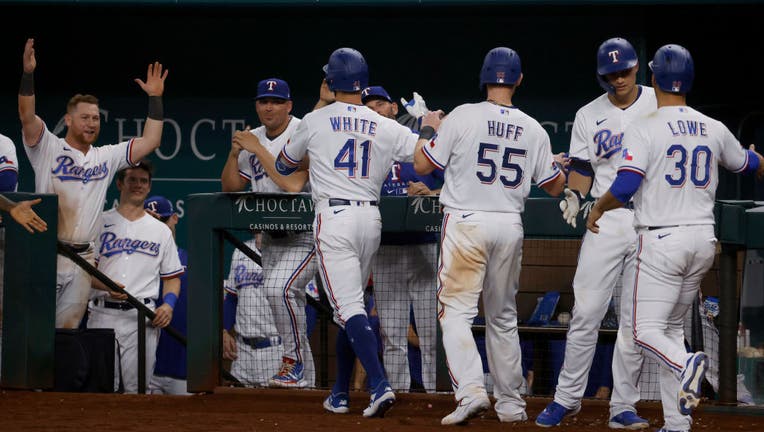 ARLINGTON, TEXAS - MAY 17: Eli White #41 of the Texas Rangers celebrates after hitting an inside-the-park home run in the bottom of the eighth inning against the Los Angeles Angels at Globe Life Field on May 17, 2022 in Arlington, Texas. (Photo by Ro

ARLINGTON, Texas - Corey Seager, Kole Calhoun and the Texas Rangers chased Reid Detmers early with homers in the left-hander's first start since throwing a no-hitter for the Los Angeles Angels.

They won it late with bloops, walks and LA errors.

Seager triggered a seven-run eighth inning with a pop-up double long after his first-inning homer off Detmers, and the Rangers rallied to beat the Angels 10-5 on Tuesday night.

"There’s all kind of nuance to that inning," Angels manager Joe Maddon said. "It just started out badly and kept getting worse. It was just a really awkward, unfortunate inning."

Seager's blooper down the left-field line eluded Anthony Rendon, the third baseman who had to sprint all the way from near second base. García's infield single brought Seager home from third when second baseman Luis Rengifo ran down the grounder but made an ill-advised throw to first.

The fielding adventures were just getting started for the Angels after first baseman Matt Duffy had to leave after Rengifo's throw ended up hitting him in the face as he collided with García.

Ryan Tepera (1-1) set up the meltdown with back-to-back walks to Jonah Heim and Calhoun to load the bases before Nathaniel Lowe's single for a 5-4 Texas lead.

After Sam Huff's bloop two-run double to right for his third hit, leadoff hitter Eli White, who struck out his first four times, circled the bases when left fielder Brandon Marsh let a sharp single slip by his glove and roll to the wall. Three runs scored for a 10-4 lead.

Tepera (1-1) didn't get an out while allowing five runs — all earned despite the fielding adventures behind him. He had been replaced by César Valdez, called up from Triple-A earlier in the day, before White's sprint around the bases.

Texas won when trailing after seven innings for the first time after coming in 0-10 in such games. The Rangers also clinched the series with the Angels after answering LA's three-run first in the series opener with six in the bottom of the inning in a 7-4 victory.

"Really cool to see everything click in that one inning. It won us the ballgame," Calhoun said. "That’s what this team can do. It showed up in the first inning yesterday and it popped up in the eighth inning tonight."

"You have success one day and then the next day you don't," Detmers said. "That's just how it is. You've got learn from it. It's just baseball."

Trout's homer was his 10th this season and 42nd against the Rangers, one behind Reggie Jackson for the most by an opponent since the franchise moved to Texas 50 years ago.

Taylor Ward homered leading off the third before Rendon put the Angels up 3-1 with a two-run shot with one out off Texas starter Taylor Hearn.

Dennis Santana (1-1) struck out two in a scoreless eighth before the Texas rally.

Seager’s opposite-field shot to left was his eighth — all at home in his Texas debut after signing a $325 million, 10-year contract.

Seager now has more homers at Globe Life Field as a Ranger than a Los Angeles Dodger after hitting seven for LA during the neutral-site postseason in 2020. He was the NL championship series MVP and World Series MVP for the champs.

Shohei Ohtani had a painful night when he fouled a ball off his groin area before a second strikeout that left him at 0 for 4. He singled in the ninth before being replaced by a pinch-hitter.

Angels: INF David Fletcher (hip surgery) was transferred to the 60-day IL to make room on the 40-man roster for the addition of RHP César Valdez from Triple-A Salt Lake. The Angels needed bullpen depth with Jaime Barría unavailable for a few days after pitching 4 1/3 innings in the opener. RHP Andrew Wantz was sent down.

Rangers: C Mitch Garver (right forearm strain) will be limited to designated hitter for a while when he returns from a rehab assignment, manager Chris Woodward said. Garver could return to the club for the start of a four-game series at Houston on Thursday. He has been out since May 8.

Rangers: RHP Dane Dunning (1-2, 4.06) gave up a season-high five runs in a 7-1 loss to Boston in his most recent start after allowing a total of four earned runs in his previous three starts.