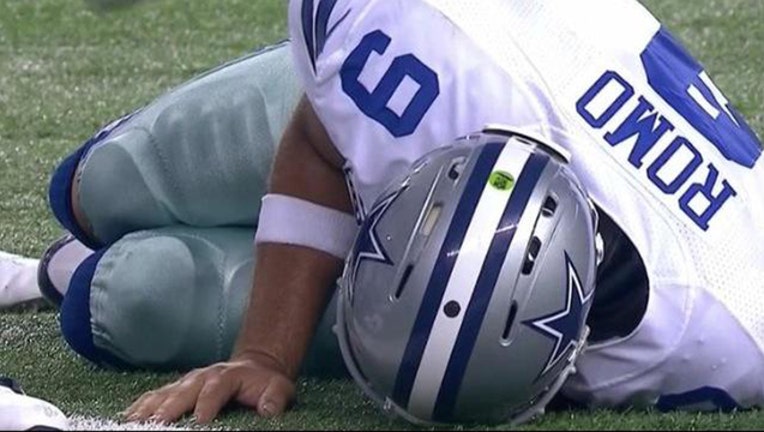 ARLINGTON, Texas (AP) — Matt Ryan and Julio Jones have Atlanta on the kind of roll Tony Romo and Dez Bryant were enjoying with Dallas before long-term injuries sidelined both and clouded the team's hopes of defending an NFC East title.

The Cowboys (2-0) managed to win each time after Bryant went out in the opener with a broken right foot and Romo was lost a week later with a broken left collarbone that will cause him to miss at least seven games.

Ryan and Jones, meanwhile, are leading the NFC in yards passing and receiving for the Falcons (2-0), who didn't get their third win until November last year after waiting even longer in 2013. But they have a shot to get there Sunday against a depleted Dallas offense.

"One of the biggest messages, whether it's this week or any other week, is that we really don't want the opponent to dictate our readiness," first-year Atlanta coach Dan Quinn said. "That means all healthy, not, however it goes."

Brandon Weeden will make his second start for Dallas after filling in once for Romo last season after a back injury. He lost to Arizona to extend his personal losing streak to eight starts going back to his disappointing two-year stint in Cleveland to start his career.

Terrance Williams is his top target with Bryant out, and they paired up for a clinching 42-yard touchdown after Weeden came on in the third quarter of last week's 20-10 victory at Philadelphia.

"I think his command is significantly better, I think he learned from his experiences playing last year," Dallas coach Jason Garrett said. "He had a really good offseason for us, a really good training camp. I think a lot of that has to do with his comfort level with the system and with the guys around him."

The comfort level is growing with Ryan and Jones in their fifth season together. Jones has five 100-yard performances in the past six games going back to last season, including a career-high 259 yards last December at Green Bay. He had a career-best 13 catches in last week's 24-20 win over the New York Giants.

"I can look at Matt now or he can look at me and we're thinking the same thing," said Jones, who has 276 yards and two touchdowns. "Just being with Matt for five years now, allowed me to have a better understanding of what he's looking at and vice versa."

Things to consider in a meeting of two teams that rallied from 10 points down in the fourth quarter to beat the Giants this season:

RUNNING IN PLACE: The Falcons are still looking for significant production out of their revamped running game. Through the first two games, Atlanta ranks 22nd in the league at 80.5 yards per game. Rookie Tevin Coleman has shown flashes of potential, but he won't be able to go because of a rib injury. Second-year player Devonta Freeman is poised to step into the starting role and another rookie, Terron Ward, could play a larger role against the Cowboys.

Dallas is still struggling to replace DeMarco Murray, ranking 20th at 94.5 yards per game with a per-carry average of just 3.4 yards. Joseph Randle is the primary back for now.

DETERMINED WITTEN: Dallas tight end Jason Witten has two sprained ankles and a sprained left knee but has no intention of missing a game for the first time since early in his rookie season in 2003. He has played in 189 straight regular-season games — and 196 counting the playoffs. But it's not about the streak. "It's about going out there and playing and playing well," said Witten, who was listed as probable Friday.

WHERE'S RODDY? While Jones has turned in two dominating performances, Roddy White didn't have a catch in the victory over the Giants. In fact, he was targeted just once on a day when Ryan threw 46 times. Ryan, who has 661 yards passing, said he still has plenty of confidence in the 33-year-old White. "He's going to make a lot of plays for us," Ryan said. "It's going to be a different guy every week stepping up."

LACKING SACKS: Dallas has just two sacks in two games after putting so much emphasis on the pass rush in the offseason. Free agent pickup Greg Hardy has to sit two more games on a domestic violence suspension, and rookie second-round pick Randy Gregory will likely miss his second straight game with a sprained right ankle.

RARE TERRORITY: The Falcons have started 3-0 only four times in the franchise's 50-year history. The previous two times — 2004 and 2012 — they went on to reach the NFC championship game. Quinn is trying to become only the second Atlanta coach to start his career with three straight wins. Jim Mora won his first four games in '04.