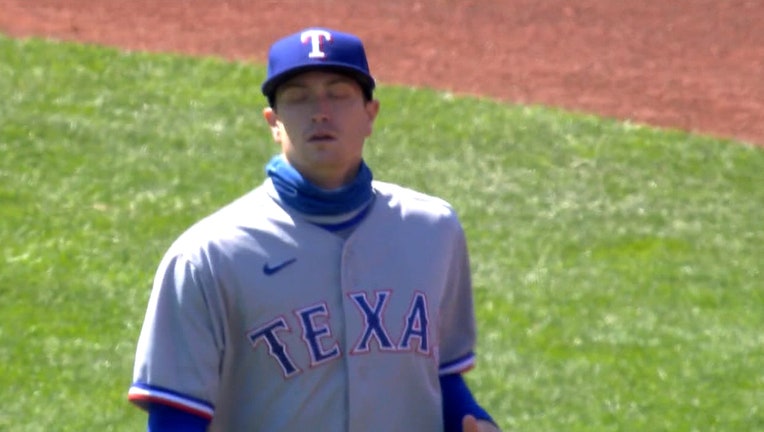 KANSAS CITY, Mo. - Much of the attention on the Kansas City Royals this offseason centered around the acquisitions of first baseman Carlos Santana and left fielder Andrew Benintendi.

It was another newcomer who made his mark as Kansas City stormed past the Texas Rangers 14-10 in a wild season opener Thursday.

Michael A. Taylor homered, drove in three runs and threw out two players at the plate from center field in a do-it-all debut for the Royals.

"I don’t know if you can have a better intro," manager Mike Matheny said. "He showed everything."

Each team scored five times in the first inning of a game that took 4 hours, 26 minutes. The first seven Rangers batters reached safely — on six hits and a walk — but Kansas City roared back to win with the help of home runs by Jorge Soler and Whit Merrifield. Kyle Isbel had three hits and two RBIs in his big league debut.

"That’s the best opening day I’ve been a part of," Matheny said. "To watch how those guys responded right away, and then keep coming, it was a beautiful thing to watch. A lot was said about not putting a lot of faith in what happened in spring training, but stuff like that happens because of what we saw. Man, that was special."

Taylor, who spent his first seven seasons with Washington, had three hits and three RBIs. Merrifield also got three hits, scored twice and knocked in two.

Kansas City set a club record for runs on opening day, surpassing its previous high of 11 in 1979, as both pitching staffs struggled. The teams combined for 30 hits, 17 walks, 14 pitchers, 26 runners left on and 402 total pitches.

"Early on it was exactly what we had described," Texas manager Chris Woodward said. "We put pressure on them right from the beginning. Really solid at-bats. It led to five early runs, and eight runs in the first three innings.

"On the pitching side it was really weird. They had two weak groundballs for hits and then three walks. Those are things we’ve been preaching heavily not to do, and it led to them getting back in the game. At that point it was a free-for-all."

Carlos Hernandez (1-0) struck out five in three innings of two-run relief for his first career win. Wade Davis whiffed two batters for a save in his return to the Royals.

Both starting pitchers were ineffective. Brad Keller recorded his first out for Kansas City on his 30th pitch and was charged with six runs and nine hits in 1 1/3 innings. Kyle Gibson got his only out of the day on his 27th pitch and allowed five runs and four hits.

"I felt like we executed the game plan, which is kind of crazy to say," Keller said. "But they put balls in play where we weren’t. It kind of snowballed on me."

Texas jumped on Keller right away. Isiah Kiner-Falefa and David Dahl doubled. After a walk to Joey Gallo loaded the bases, an infield single by Nick Solak scored one. Nate Lowe hit a three-run double to the opposite field and scored on a single by Eli White.

According to the Elias Sports Bureau, the Rangers became the second team since 1961 to open a season 6 for 6 (the 1995 World Series champion Atlanta Braves were the other).

Keller’s defense saved him from further damage. Benintendi leaped against the wall in foul territory to snare the first out. Taylor cut down Brock Holt at home plate for the second out of the first inning.

"I take more pride in my defense," Taylor said. "It’s always nice hitting homers, but I guess they both help the team. But it’s nice when you can take one off the board."

The Royals got to Gibson just as quickly in the bottom of the first. Merrifield and Benintendi singled to open the inning, followed by consecutive walks to Santana, Salvador Perez and Soler. With one out, Isbel and Taylor singled in runs. Nicky Lopez drove in the tying run with a sacrifice fly.

"It was amazing to see," Keller said. "I fell in a hole early, down five runs after the first inning. But they came out swinging, walking. Five runs right back on the board, and it was a new ballgame going back out for the second."

Royals: SS Adalberto Mondesi went on the 10-day IL with a right oblique strain on Wednesday. ... 3B Hunter Dozier left the game with a bruised right thumb.

LHP Mike Minor returns to the Royals after spending the past three seasons with Texas and Oakland. He was 6-6 with a 2.55 ERA for Kansas City in 2017.