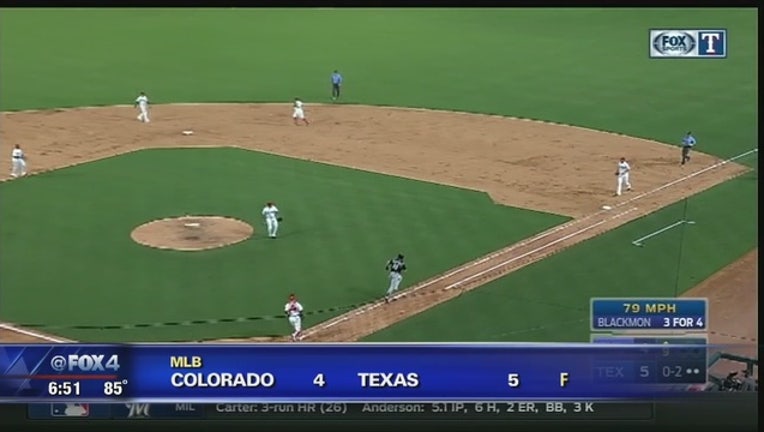 ARLINGTON, Texas (AP) — David Dahl's triple gave the Colorado Rockies a chance to give Texas a little payback with a late comeback and put him on the brink of a modern major league record.

Instead, Adrian Beltre and the Rangers left the rookie and his teammates with an all-too-familiar feeling.

Beltre answered Dahl's tying hit and go-ahead run with a two-run single in the eighth inning, and the Rangers rallied late for the third straight game against the Rockies in a 5-4 victory Wednesday night.

The first two comebacks were in Denver, where the Rangers had a three-run ninth for a 4-3 victory and erased a three-run deficit in the eighth inning of a 7-5 win. Texas extended its winning streak to five.

Colorado lost three of the last four on its just-completed homestand when leading after seven innings. And now this after their stirring comeback in the eighth. The Rockies have lost six of seven games.

"We'll work our way through it," manager Walt Weiss said. "I feel like we have enough talent there to get it right. We just have to get on a roll."

In the first of two games in Texas, Dahl's two-run triple extended his career-opening hitting streak to 16 games, matching Juan Pierre's franchise record from 2000. It's one shy of the post-1900 mark set by Cincinnati's Chuck Aleno in 1941.

Dahl, the lefty hitter who ripped the second pitch from left-handed reliever Jake Diekman (3-1) down the line in right, scored the go-ahead run on Ryan Raburn's sacrifice fly.

"Yeah, I've seen people tag me on Twitter," Dahl said when asked if he was aware of his streak. "I try not to think about it."

Beltre wasn't surprised to see Colorado intentionally walk new teammate Carlos Beltran in front of him to load the bases with first base open and two outs in the eighth. Neither was Jeff Banister.

"You pick your poison in that situation," the Texas manager said. "It's a comfortable feeling to have one of those guys coming to the plate for you in those situations. So yeah, it will never get old talking about that."

It also gave the Rangers a happy ending on a day that started somberly with slugger Prince Fielder's emotional announcement that he was following a medical recommendation to quit playing because of a second cervical fusion surgery on his neck.

Matt Bush, the 30-year-old rookie reliever, pitched a perfect ninth for his first big league save.

Jonathan Lucroy homered in his first home game since the deadline trade that brought him to Texas, giving the Rangers a 3-1 lead in the fifth.

It was also the first game in Arlington for Beltran since the deadline deal with the Yankees. He singled his first time up, but didn't get a chance in the eighth.

Instead, Beltre's hard grounder skipped past shortstop Cristhian Adames into left center off Adam Ottavino, the third Colorado reliever of the inning.

Both Texas runs in the eighth were unearned after Mitch Moreland reached on first baseman Mark Reynolds' one-out error with Boone Logan (1-2) pitching.

Colorado lefty Jorge De La Rosa allowed three runs in five innings, ending an 11-game streak of quality starts for the Rockies. The streak was one shy of the franchise record from 2011.

Rockies leadoff hitter Charlie Blackmon had three singles, including one on a 13-pitch at-bat against Perez in the third. ... The Rangers have a majors-leading 36 comeback victories.

Rockies: RF Carlos Gonzalez was out of the lineup for the fourth time in seven games since spraining his left ankle Aug. 3 against the Dodgers. Manager Walt Weiss said he's still day to day.

Rockies RHP Chad Bettis (10-6, 5.13 ERA) faces Rangers RHP Lucas Harrell (3.2, 3.46 combined NL/AL) in the second of two games in Arlington after the teams played a pair in Denver. Bettis, a Texas native, has never faced the Rangers. Harrell has a 7.40 ERA in five career starts against the Rockies.