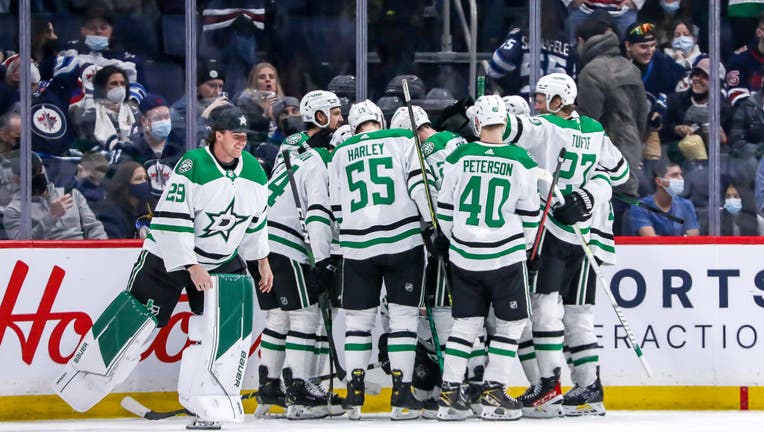 WINNIPEG, MB - MARCH 4: Dallas Stars players celebrate on the ice following a 4-3 overtime victory over the Winnipeg Jets at the Canada Life Centre on March 4, 2022 in Winnipeg, Manitoba, Canada. (Photo by Darcy Finley/NHLI via Getty Images)

WINNIPEG, Manitoba (AP) - Jason Robertson scored his third goal of the game with 30 seconds left in overtime, lifting the Dallas Stars to a 4-3 victory over the Winnipeg Jets on Friday night.

Denis Gurianov scored the tying goal late in the third period for the Stars, and Braden Holtby made 39 saves.

Robertson acknowledged he was tired late in overtime, but the Stars forward pounced on an opportunity for a breakaway.

"I was out there for a while," Robertson said. "When the puck turns over, I didn’t stop, I kept moving my feet and you just find that extra ounce of energy to go down there.

"I can’t lie, I love breakaways. I want a breakaway, so I find whatever energy is left to get that."

"Listen, he’s a natural goal scorer," Bowness said. "He’s got a great touch around the net and he loves to score. His poise with the puck and where to put it and when to put it, you can’t teach those instincts that he has. You just can’t, and he has those natural instincts goal scorers have."

The overtime winner gave Robertson 26 goals on the season, nine more than he had the entire 2020-21 campaign.

"I always have that confidence in me," he said. "I always want to have that creativity. The guys on the ice have been able to find me in an open space, so kudos to them. I’m a skilled player and that’s what I’m out there to do."

Bowness also credited Holtby's performance in net for the Stars, especially while facing six power plays and giving up just one goal.

"He was outstanding for us, and he had to be because of the penalties which are uncharacteristic of our team," Bowness said. "You take that many penalties, it killed the flow of our game and we spent too much time in our zone because we lost the energy. Braden, he made some huge, huge saves. He was great."

With the Jets leading 3-2, Gurianov’s screened shot from the point beat Hellebuyck with 4:32 left in the third period to tie it. Jamie Benn and Ryan Suter assisted.

Stastny had given the Jets the lead at 12:19 of the third when he converted a pass from behind the net from Blake Wheeler.

"I think, if we’re going to lose, I’d rather lose like this rather than where two weeks ago where we are getting outshot 2 to 1 and we find a way to get a point," Stastny said. "We had our chances."

Winnipeg tied the game at 2 early in the third when Connor pounced on Evgeny Svechnikov's rebound and got the puck past Holtby off a Dallas defenseman at the 1:21 mark. Pierre-Luc Dubois also assisted.

That came after the Stars had taken a 2-1 lead into the third period. After Nikolaj Ehlers fell inside the Dallas blue line, the Stars had a 2-on-1. Robertson converted that with a backhand shot after taking a pass from Thomas Harley at 19:09 of the second.

The Stars opened the scoring at the 5:23 mark of the first period. Robertson took a pass from Suter at the point, then completely deked Hellebuyck to the ice and slid a backhand into the empty net.

Stastny tied it at 1 on a second-period power play. He converted a pretty pass from Andrew Copp with Stars forward Riley Tufte off for slashing at 13:23. Ehlers also assisted.

"It was a big game for us, especially when they came out hard," Holtby said. "At times, you could tell they were a desperate team. We held our ground and got some big goals and big plays. This point in the season, it doesn’t matter how you beat them."

NOTES: Ehlers returned after missing 19 games with a torn MCL. ... Jets D Nathan Beaulieu hobbled off the ice late in the first period after a collision.

Stars: At Minnesota on Sunday in the second of a three-game trip.

Jets: Host the New York Rangers on Sunday in the third of a four-game homestand.