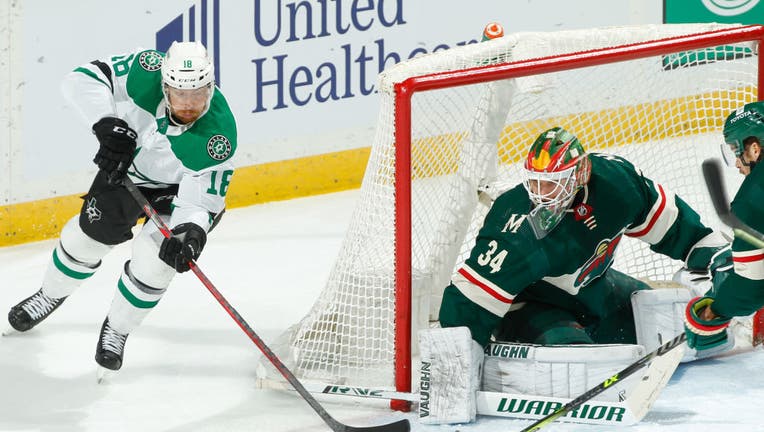 SAINT PAUL, MN - MARCH 6: Kaapo Kahkonen #34 of the Minnesota Wild defends his goal against Michael Raffl #18 of the Dallas Stars during the game at the Xcel Energy Center on March 6, 2022 in Saint Paul, Minnesota. (Photo by Bruce Kluckhohn/NHLI via

ST. PAUL, Minn. (AP) - Jason Robertson had his second hat trick of the weekend and the Dallas Stars beat the Minnesota Wild 6-3 on Sunday.

Robertson is up to 29 goals on the season, seven of which have come in the last three games. Joe Pavelski and Jamie Benn also scored for Dallas, and Riley Tufte added his first NHL goal. Jake Oettenger had 32 saves.

For Minnesota, Kirill Kaprizov scored twice and Nico Sturm added a goal. Kaapo Kahkonen gave up four goals on 21 shots before being pulled midway through the second period. He was replaced by Cam Talbot, who stopped all three shots he faced.

The Stars have won four in a row and seven of their last nine. The Wild have lost eight of their last 10 games and are now tied with Dallas for third place in the Central Division.

Trailing 4-1, the Wild pulled Talbot for an extra skater with just under nine minutes to play, and Kaprizov cut the deficit to 4-2 on a wrist shot with 3:41 remaining. Kaprizov scored his second of the game with 1:57 to play.

But Benn finally put it away for the Stars when he sent the puck the length of the ice into the empty net with about a minute left and Robertson got his third goal with another empty-netter with 32 seconds to play.

Minnesota outshot the Stars 6-0 in the game's first four minutes. Sturm scored his ninth goal of the season midway through the period.

The Stars tied it with a disputed power-play goal in the final seconds of the first, when Tyler Seguin crashed the net for a shot that Kahkonen stopped. The puck bounced out to Pavelski, whose backhanded swipe banked off Minnesota's Dmitry Kulikov and into the net.

Minnesota coach Dean Evason challenged the call, claiming goaltender interference. But officials ruled that Seguin was knocked into the crease by the Wild's Frederick Gaudreau and the goal was allowed to stand.

The Stars opened the second period on another power play and capitalized, as Robertson jammed home a rebound of a shot by John Klingberg.

Less than two minutes later, Kahkonen coughed up another rebound of a Klingberg shot, and Tufte -- a Twin Cities native who played at Minnesota-Duluth -- fought off a defender to knock it into the net.

Dallas took a 4-1 lead midway through the second when Robertson fired a wrist shot from the top of the left faceoff circle that slipped under Kahkonen's armpit and trickled into the net.

Stars: At Nashville on Tuesday.