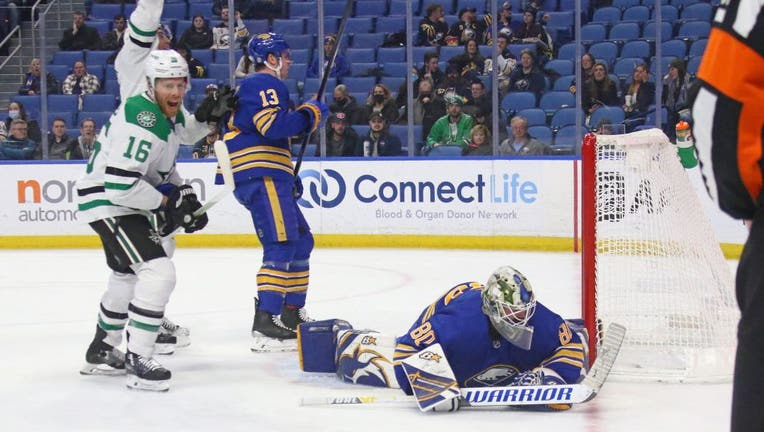 BUFFALO, NY - JANUARY 20: Joe Pavelski #16 of the Dallas Stars reacts as Tyler Seguin (not shown) scores a third period goal against Aaron Dell #80 of the Buffalo Sabres during an NHL game on January 20, 2022 at KeyBank Center in Buffalo, New York. D

BUFFALO, N.Y. - Tyler Seguin and Jason Robertson each scored twice, including consecutive goals late in the third period, to lift the Dallas Stars over the Buffalo Sabres 5-4 Thursday night.

Roope Hintz added a goal and an assist, John Klingberg had three assists and Braden Holtby made 20 saves as the Stars opened a four-game trip by ending a streak of seven losses on the road. Dallas also snapped a three-game skid overall.

"We needed it. There’s no question," Stars coach Rick Bowness said. "We had to stop that slide on the road."

The Stars converted on 4 for 5 power plays after going scoreless in 15 chances over their past six road losses.

"We kept it really simple tonight," Robertson said. "And it paid off."

Seguin added the Stars "also have a kid named Jason Robertson who ties it all together."

"For a guy that’s really in his second year in the league," Bowness said, "he has tremendous poise and confidence with the puck."

Robertson returned from missing two games with a lower-body injury and knocked in the rebound from Klingberg’s point shot to trim the Sabres’ lead with 3:10 remaining in the first period. He has 15 goals this season.

"This morning, I was kind of debating on it because it’s a back-to-back," Robertson said. "For sure going to play tomorrow. But I wanted to play in this game and help my team right away."

Rasmus Dahlin had a goal and an assist for the Sabres, who have lost nine in a row at home. Jack Quinn tallied his first NHL points with a goal and an assist, Alex Tuch and Dylan Cozens also scored, and Henri Jokiharju had two assists. Aaron Dell stopped 42 shots.

"Our young guys did a great job today," Dahlin said. "We just have to find a way to win these type of games against this type of veteran team."

Tuch scored to give Buffalo a 4-3 lead with 5:47 remaining in the second period. He received a pass from Dahlin as he entered the zone and sniped a shot from the top of the right circle in between Holtby’s blocker and the near post.

Seguin had tied it three minutes earlier, sending a puck from the right corner that bounced off the back of Buffalo’s Mark Pysyk.

Bowness praised Seguin for playing "his best game of the year by far" after being moved to center on the second line.

The Sabres opened a back-and-forth second when Victor Olofsson set up Cozens on a breakaway for his 10th, making it 3-1 at 1:09 of the period.

Hintz responded for Dallas at 5:26, finishing a feed from Robertson on a power play for his 16th goal to match linemate Joe Pavelski for the team lead.

Buffalo built a 2-0 advantage in the opening seven minutes. Dahlin skated up the left wing and beat Holtby with a backhand for his seventh goal at 2:47 of the first. Dahlin, the Sabres’ lone All-Star, then assisted on a power-play goal from Quinn, the Sabres’ first-round pick in 2020 playing his second game since being called up from the minors.

"Something you kind of dream about," Quinn said. "So it was pretty special to see it go in and it was exciting to celebrate there with my teammates."

Sabres: Malcolm Subban, one of six goalies to start for Buffalo through the first 40 games, is out for the season after surgery for an upper-body injury. Ukko-Pekka Luukkonen (lower body), Dustin Tokarski (COVID-19), and Craig Anderson (upper body) remain out with no set return date. ... D Will Butcher left in the second period with an injury and did not return. ... F Kyle Okposo (upper body) is week-to-week after getting hurt Tuesday in Ottawa, D Colin Miller (upper body) is out at least six weeks after undergoing surgery and F Vinnie Hinostroza (lower body) will miss at least three more weeks. ... F Casey Mittelstadt (upper body) skated Thursday and is nearing a return after undergoing surgery on Dec. 10. Buffalo’s top-line center to open the season, Mittelstadt has played in four games.

With Robertson’s return, the Stars scratched F Rhett Gardner and assigned him to the taxi squad. ... The Sabres sent F Brett Murray back to the minors.

Stars: At Detroit on Friday night.