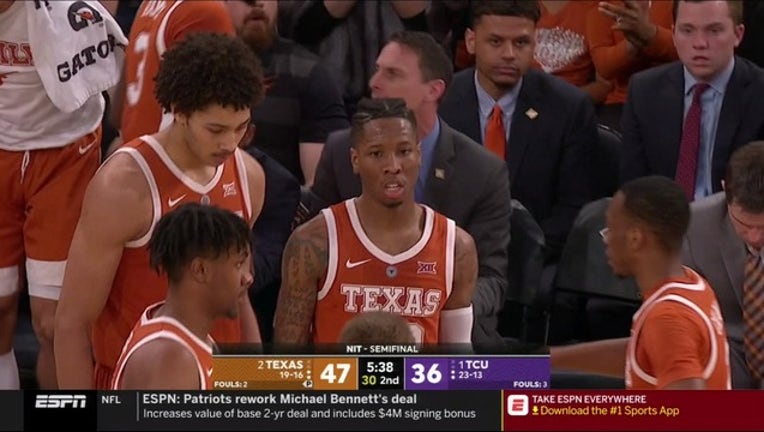 NEW YORK (AP) - Kerwin Roach II is the Texas guard's name, not the tally marks for his season suspensions.

Back on the roster, Roach stayed in the game and kept the Longhorns in the hunt to end the season in New York with a championship.

Roach turned a season marred by suspension into a can't-miss performance in the first half to help Texas get comfortable at Madison Square Garden and beat TCU 58-44 on Tuesday night for a spot in the NIT championship.

"It was tough for our team when he went out," coach Shaka Smart said. "It was certainly tough for him. He was really, really down and disappointed in himself."

He's got one more game left, and the Longhorns (20-16) will play Lipscomb for the title on Thursday night at the Garden.

Roach served two suspensions this season and was pained as he had to watch senior night festivities from the bench. Roach was reinstated for the Big 12 Tournament and led Texas to its fourth straight win in the NIT. He scored 13 of his 22 points in the first half to spark the Longhorns to a 15-point lead, and they held on against pesky TCU (23-14). Texas can win its first NIT title since 1978.

TCU had swept the season series against Texas and failed to go 3-0 against its in-state and Big 12 rival. Texas still has won 18 of the last 25 games against the Horned Frogs.

TCU coach Jamie Dixon insisted his team (with a 7-11 mark in the Big 12) was snubbed by the NCAA Tournament selection committee and used it as a motivating force for the program. Fueled by the snub, the Horned Frogs stormed past Sam Houston State, Nebraska and Creighton to get to New York.

Dixon has led a traditionally downtrodden program in TCU into a mid-pack Big 12 winner, one reason why speculation has swirled that UCLA has targeted him as a candidate for its vacancy.

"I have a great job. I'm very lucky where I'm at," Dixon said, dismissing UCLA questions.

"I remember before he got here, we were a really separated bunch," he said. "He made sure we came together and played together."

The Horned Frogs won the NIT in 2017 and made the NCAA Tournament last season for the first time in 20 years. The push for back-to-back tourney bids fell just short, and so did a second-half run that whittled the lead to five.

Roach dunked off a beautiful backdoor cut and Dylan Osetkowski scored a baseline layup off a pick-and-roll to give Texas breathing room and end the threat. Roach had averaged 15.7 points in the NIT, Osetkowski had 15.3 points and the duo delivered again in the semifinal. Osetkowski, who had 13 points and nine rebounds, connected on a late 3 that made it a 14-point lead and left only a few hundred burnt orange cheering faithful in the house.

Smart has only said that Roach violated university policy for the stretch-run suspension of his leading scorer (14.8 points). Roach had also been suspended for the season opener and the 2016 season opener. Three career suspensions, and one more chance to cut down the nets.

"He's a guy that's got a level of athleticism that allows him to get by his man and put the other team in a bit of a bind," Smart said.

Texas returns to MSG in November - along with Duke, Georgetown and California - to play in the Empire Classic.

It's a Thursday night matchup against Lipscomb in the NIT championship. Garrison Mathews swished his ninth 3-pointer of the game in front of an exuberant Lipscomb bench for the lead with 1:10 left in the game to send the Bisons past Wichita State 71-64. Mathews finished with 34 points.