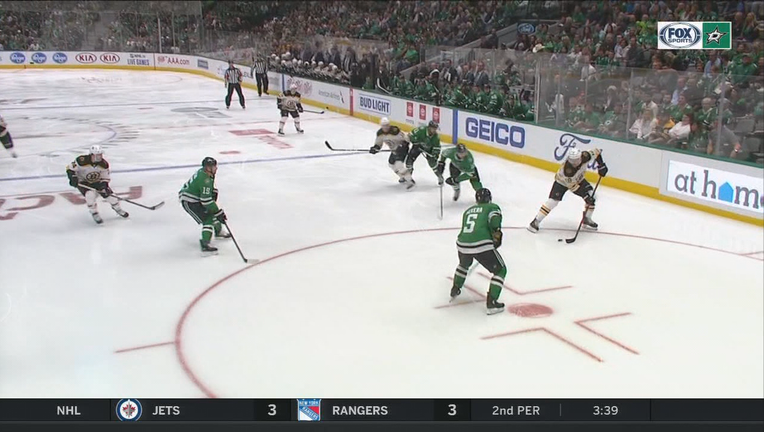 DALLAS - Brett Ritchie had never taken the ice in an NHL game with a team other than the Dallas Stars when he debuted for the Boston Bruins.

After scoring on his first shift, Ritchie watched his former teammates basically form a parade route out of the rink with injuries.

The new Boston forward scored barely a minute in, Dallas defenseman Roman Polak was taken off on a stretcher just before the Stars' only goal and the Bruins opened defense of their Eastern Conference title with a 2-1 victory Thursday night.

Danton Heinen had a power-play goal in the first period as the Bruins beat Vezina Trophy finalist Ben Bishop with their first two shots in a season-opening meeting of teams that lost Game 7s in the playoffs to Stanley Cup champion St. Louis last season.

"You're not going to score on your first two shots very often," said Ritchie, who was with the Stars when they lost in double overtime in the second round last spring before the Bruins fell to the Blues in the Cup finals.

"We jumped out to the lead there and built the momentum for the first, and then they took it to us in the second."

Dallas' goal came less than a minute after Polak had to be taken off on a stretcher after going head-first into the boards when he tried to check Chris Wagner with 12:56 remaining in the second period.

Polak barely moved while face down on the ice before being rolled onto a board and lifted onto the stretcher during a delay that lasted almost 10 minutes. Coach Jim Montgomery said after the game Polak was OK after an evaluation at a hospital and could return soon.

"I think obviously we kind of didn't want to think about it after it happened," defenseman John Klingberg said. "We got to get back playing again. It's tough to see a teammate go down like that."

Roope Hintz's goal came 51 seconds later when the 22-year-old beat Tuukka Rask stick side on a partial breakaway after Mattias Janmark split two defenders with a pass. Joe Pavelski got his first point with the Stars with an assist on the takeaway that started the rush.

"You've got to find ways to stay in games and give yourself a chance," Pavelski said. "I thought we did a good job with that. We kept coming, kept getting better. It was right there for us."

The Stars had 16 of their 29 shots in the third period, and Rask stopped them all to finish with 28 saves. The 13th-year pro entered the season with the best goals-against average among actives goalies at 2.28.

"I felt the best in the third," Rask said. "I don't know if that's because it was the most action or what, but a big win."

Before Polak's injury, forward Blake Comeau sustained a lower body injury when he fell awkwardly after getting hit in the cheek by a puck in the first period. Montgomery said he would miss multiple weeks.

The Stars lost another forward after the first period when Jason Dickinson didn't return with an upper body injury.

"It's life in the NHL," Montgomery said. "Next man up. We went through it all of last year and we're a resilient group. We're a deep organization and we're going to be OK."

Ritchie's goal came 1:09 in when Andrew Cogliano couldn't get a clearing pass from Bishop out of the zone and turned over the puck near the blue line. Charlie Coyle got an assist.

The 26-year-old Ritchie spent his first five NHL seasons with Stars as a 2011 second-round pick, signing as a free agent in Boston following two disappointing seasons in Dallas after he scored 16 goals -- nearly half his career total -- in 2016-17.

"I'm still confident in what I can do," Ritchie said. "New team, new opportunity, fresh start, whatever you want to call it. I just tried to take advantage of it."

Heinen beat Bishop from the left circle about five minutes later after Alexander Radulov was called for holding. Bishop stopped all 18 Boston shots after that.

NOTES: Former President George W. Bush did the ceremonial puck drop. Bush and former first lady Laura Bush live in Dallas. ... The Bruins improved to 9-21-5 in season openers on the road. The previous road win in an opener was 4-3 in overtime at New Jersey in 2010. ... The Stars opened the season at home for the ninth straight year. They are 5-3-1 in those games.