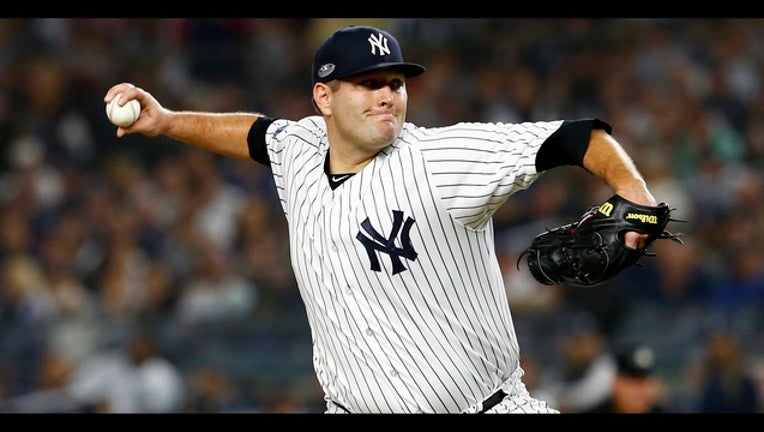 Lance Lynn of the Yankees throws a pitch against the Red Sox during the fourth inning in Game Three of the American League Division Series at Yankee Stadium on October 08, 2018 in the Bronx borough of New York City. (Photo by Mike Stobe/Getty Images)

LAS VEGAS (AP) - Free agent right-hander Lance Lynn and the Texas Rangers reached agreement on a $30 million, three-year contract during the winter meetings, a person with direct knowledge of the agreement said.

The deal is pending a physical, the person said Thursday, speaking on condition of anonymity because the contract isn't complete.

Texas was in the market for a steady starting pitcher to join a rotation that lost Cole Hamels midseason when he was traded to the Cubs before the July deadline.

He was late to sign last offseason, agreeing March 12 on a $12 million, one-year deal with the Twins. Lynn's bargaining power was hurt because St. Louis had made a $17.4 million qualifying offer, which caused the Twins to forfeit their third-round amateur draft pick as compensation and the Cardinals to gain an extra pick, No. 75 overall.

The Yankees acquired Lynn before the trade deadline last summer and he replaced disappointing Sonny Gray in New York's rotation for the stretch run. Lynn made 11 appearances and nine starts for the Yankees, going 3-2 with a 4.14 ERA.

Texas is coming off consecutive losing seasons for the first time since 2005-08. The Rangers, who won the AL West in 2015 and '16, fired manager Jeff Banister and replaced him with Chris Woodward.